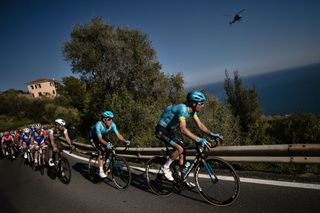 Milan-San Remo remains one of the 2020 Italian spring races in danger of being cancelled as a result of the coronavirus outbreak (Image credit: Getty Images Sport)

The 2020 season's Strade Bianche, Tirreno-Adriatico and Milan-San Remo are all believed to be on the brink of collapse as race promoter RCS Sport faces increasing pressure from leading teams, including EF Pro Cycling, and as the Italian government prepares to suspend all sporting events for a month to limit the spread of the Covid-19 coronavirus.

Italians in the northern regions of Lombardy, Veneto and Emilia Romagna – where most of the cases have emerged – have now been told to stay one metre apart from each other in public spaces, based on the distances saliva droplets apparently travel when people speak.

Following its publication by the Wall Street Journal on Tuesday, Cyclingnews has now also seen the letter sent by US WorldTour team EF Pro Cycling to UCI president David Lappartient and RCS director Mauro Vegni asking if the race promoter has "a robust containment and prevention strategy in place for the protection of both the teams and the communities", before then proposing a "mutual agreement" for the team's non-participation in the forthcoming Italian races.

"Every one of our riders and staff is enthusiastic and prepared to race these events," the letter continued. "However, we must put those feelings aside and do what we feel is right for our global community."

'What about the elderly people that come out to watch or collect a bidon?'

Speaking to Cyclingnews, EF Pro Cycling team boss Jonathan Vaughters added: "Seventy-two hours ago I would not have truly thought about this, but, thanks to some experts and our management team, we really started to consider the impact of a team traveling from town to town in an affected area.

"Maybe our healthy athletes and staff would be OK, but what about the elderly people that come out to watch or collect a bidon?" he asked.

"From what I understand, this isn't to dead-stop the inevitable spread of Covid-19 – this is about helping slow it down until medical professionals and hospitals have time to catch up and prepare for the most vulnerable in hospitals and other facilities.

"This isn't about panic," Vaughters continued. "This is about being responsible. We will be doing plenty of races this year, and if these races get rescheduled, or even if they come up with ways to eliminate this risk in present time, we will be there."

At the time of writing, the virus remains focused on northern Italy, with the region of Lombardy the worst affected, but it has now begun to spread south, with isolated infections confirmed in all but one of Italy's 20 regions.

Medical experts have advised the Italian government to cancel sporting and public events for a month to slow the rate of contagion. Football matches could be played behind closed doors and televised but the very nature of cycling races and how they cover large stretches of public roads, make it virtually impossible to avoid contact with crowds and respect any rules of contact with the public.

The cancellation of Milan-San Remo, at least, would come as little surprise to RCS head Vegni, who was openly discussing the possibility during the UAE Tour.

"I think we must fear that the national health administration and the Italian National Olympic Committee [CONI] might ask us to cancel Milan-San Remo, as they have already cancelled some Serie A football matches," Vegni said.

Meanwhile, disquiet over RCS' handling of the ill-fated UAE Tour's coronavirus crisis and over the Italian promoter's attitude towards health and safety in forthcoming races is also growing, with three teams still stranded and ostensibly in 'quarantine' at their UAE Tour team hotel, almost a week after the race was dramatically abandoned.

Marc Madiot, general manager of the Groupama-FDJ team – which has riders and staff still being forced to remain in their Abu Dhabi hotel, along with members of Cofidis and Gazprom-RusVelo – has appealed to the French Minister for Foreign Affairs to exert pressure to ensure that his riders and staff are repatriated from the UAE as soon as possible, although with further cases now announced, this seems unlikely.

"The hardest part is the yo-yoing," he said. "They tested them, they were negative, they thought they were leaving. Suddenly, there was a problem and everything changed. What I want today is that everyone can get back home to their families."