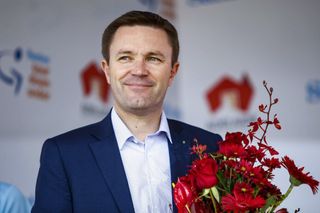 A UCI letter sent to teams, race organisers and national federations on May 5, and obtained by Cyclingnews, gives further details regarding the revised 2020 racing calendar, including cycling's governing body's relative flexibility over both the size of teams for one-day races and the dates of countries' national championships.

Signed by UCI president David Lappartient, the letter references the new dates for the elite road races at 2020 National Championships events of August 22 and 23, although for some countries such dates remain within their respective lockdown periods for sporting events.

Van der Poel's Alpecin-Fenix team manager: We want to do as many races as possible

One such example is France, where gatherings of more than 5,000 people are still banned until September 1. The French Cycling Federation (FFC) vice-president Ludovic Sylvestre told Le Télégramme on Tuesday that they could instead be looking at October to hold the French road championships, which would mean that current elite men's road race champion Warren Barguil – who won the 2019 title late last June, during the weekend normally reserved each year for European nations' national championships – would wear his tricolore jersey for a second year in a row during the rescheduled Tour de France (August 29-Septmeber 20), providing he was selected by his Arkéa-Samsic team.

There was also further direction in the letter to teams and races organisers regarding team sizes for various events, although Lappartient categorically stated that "the number of riders per team will remain eight for Grand Tours and seven for other stage races" – definitively dashing the likes of Alpecin-Fenix's Mathieu van der Poel's hopes that there might have been space freed up for him and his team to take part in the Tour de France.

However, Van der Poel's ProTeam-level squad, along with others, could still find itself receiving invitations to various WorldTour-level one-day races thanks to the possible reduction of teams sizes while many WorldTour outfits will struggle to field the usual-sized squads at rescheduled events that coincide with others, thanks to the new, somewhat squeezed calendar.

"Organisers of one-day races of the UCI WorldTour may reduce the number of riders per team to six (instead of seven riders normally) subject to the agreement of the Professional Cycling Council for each event," Lappartient wrote. "This flexibility will allow organisers to adapt the number of riders according to the circumstances of their events, considering, for example, the requests of the teams when possible.

"Also, this provision should allow organisers that have this possibility to invite more UCI ProTeams to their events to the benefit of the latter.

"Depending on the evolution of this situation, and in particular as well as the decisions of countries' government, and in the event of a change in the date of restart of the season, the cancellation of a large number of events or even the entire end of the 2020 season, the rules and procedures presented above will be subject to amendments, which will be communicated to you in due course," wrote Lappartient.

"Given the uncertainty regarding the resumption of competitions as planned, we invite all stakeholders to consider the different assumptions that could materialise."