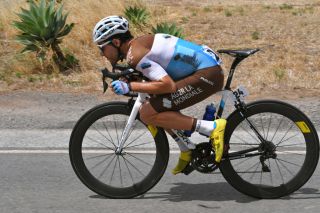 AG2R La Mondiale’s Axel Domont on the attack during stage 5 of the 2020 Tour Down Under (Image credit: Getty Images Sport)

AG2R La Mondiale's Axel Domont – one of team leader Romain Bardet's key lieutenants at the Tour de France in recent years – is determined to ensure that he hits the ground running when the 2020 season restarts in earnest in August, fighting to return to his best after suffering yet another injury setback after crashing at the Race Torquay in Australia at the end of January.

Domont rode in Bardet's service at both the 2017 and 2018 Tours de France, but crashed out of the latter with a broken collarbone on stage 4. He was then unable to ride the Tour last year due to breaking both his hip and collarbone at the Volta a Catalunya in March 2019, and the Frenchman already knows that he's not set to ride this year's Tour.

"I hope to do the Giro d'Italia [October 4-25], but I'm not really at the planning stage yet," Domont told L'Equipe on Sunday. "For the moment, I'm thinking of my body, about just being able to race. I know that I need to be able to hit the ground running at the start of August, so I've got a bit of time yet."

Domont had travelled to Australia with his wife and teammates Bardet and Clément Chevrier a month ahead of the Tour Down Under to train and enjoy some sunshine in Adelaide.

"We had a great start to the year in the sun, and I felt really strong," said Domont, who finished 67th overall at the Tour Down Under, and then travelled to Torquay, near Melbourne, for the Race Torquay – a new one-day race that took place three days before the start of the WorldTour-level Cadel Evans Great Ocean Road Race in nearby Geelong, which Domont was also set to race.

Vuillermoz rues lost year but is ready to race again

Injury-hit AG2R look to Naesen to lighten mood at Classics

A crash on a descent on a bend that was apparently covered with diesel left Domont with a broken pelvis, a long and uncomfortable trip back home to France, and three months' rest, confined to a wheelchair, with the rehabilitation to undergo that came with it once more.

It was yet another setback for Domont, who said he felt like his luck had changed for the worse after his 2018 Tour crash, and joked that in recent years he's spent "more time in the hospital than on a bicycle", and believes that he's now broken his collarbone seven times during his career.

"The rehabilitation has been difficult, and I've spent a long time in my wheelchair," the 29-year-old said of his latest injury. "But at the same time, I was well aware that I was doing better than after last year's crash in Catalonia. That was very bad; I had to stay in bed for more than a month. Twice, I'd thought about stopping my career completely, and yet I returned at a high level, and so I told myself that there was no reason why I couldn't do it again.

"At the start of my two months at the rehabilitation centre, I really felt like the most miserable guy on earth," he continued. "Then, I realised – in a place like that – that there were people with far more serious problems, so then you have to kick yourself up the arse and tell yourself that it will be fine. Still, it did make me think about my future.

"I'm going to try to do a good Giro, but without thinking too much about it," said Domont. "But if this has to be my last season, I want to leave with my head held high. The nightmare would be to end my career because of injury; I would then have regrets for the rest of my life. I want to finish with good feelings, with real goals, while still enjoying what I do. I love my job, but I won't keep doing it at any cost."