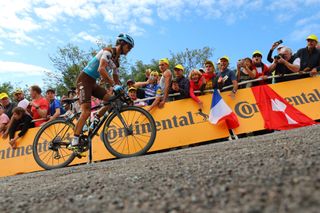 AG2R La Mondiale's Alexis Vuillermoz already knows that he won't have raced for at least a year by the time he's able to compete again. The Frenchman's last race was the 2019 Tour de France, but a training crash last August put him out of action until a hoped-for return at this year's Volta a Catalunya – which was then scuppered when the race was cancelled due to the coronavirus crisis.

Last season, Vuillermoz was called up last-minute to the Tour, having already ridden the Giro d'Italia in a leadership role for AG2R, although an asthma attack there on stage 16, while in the top 20 on the GC, caused him to crash and lose time, and he finished the Italian race 29th overall in Verona.

The team's various injury woes last summer – and Pierre Latour's inability to recover from injury in time for the Tour, in particular – saw Vuillermoz drafted in at a week's notice, and he finished 41st overall there while riding in support of Romain Bardet.

Vuillermoz to return to racing at Volta a Catalunya – News Shorts

However, in training after the Tour, Vuillermoz crashed while avoiding an oncoming car, fracturing his kneecap. It now means that the 31-year-old hasn't raced since last summer, and Vuillermoz is unsure of when his racing return might be, but a full 12 months will have passed by the team racing recommences, which would be August at the earliest.

After recovering from surgery on his knee last year, Vuillermoz began training again in January.

"I rode for 28-29 hours per week for some weeks – workloads that I had never experienced in my career before," he explained to L'Equipe at the weekend. "I felt good, and had neither gained nor lost weight. I really wanted to make a big comeback; I wanted to be in the game right away."

But then, just ahead of his planned return to racing in Spain, Vuillermoz was faced with the coronavirus lockdown in France.

"At first, I was very frustrated – even if it was obviously the best decision to make," he said. "But spending more than a year without a race is something I never imagined might happen.

"I'd almost forced things a little in order to start racing again in early March," Vuillermoz admitted, which would have been ahead of the shutdown, with Paris-Nice – the last major pro race to take place – running from March 8-14. "I knew it was completely premature, but I wanted to race again so much. I'm not now saying I'm sorry that I didn't, but maybe deep down…"

This year's Tour – set to run between new dates of August 29-September 20 after having been postponed – is a target for Vuillermoz.

"In my head, I've got the Tour as a goal, even if we still don't know how the pandemic will evolve," he said. "I remain fairly confident, and hope to be able to plan something around doing it.

"The Tour needs to be saved – even if it ends up taking place during September, with the start of the school year and the return to work," said Vuillermoz. "People would still be able to enjoy it. But it also still feels very risky to be planning anything."

While it's hoped that some Tour preparation races, such as the Critérium du Dauphiné, may happen ahead of La Grande Boucle – with racing potentially recommencing with the Strade Bianche one-day race on August 1 – there's also that possibility that only a small amount of racing might take place, with the Tour de France at the top of the list of priorities, for obvious reasons.

"It wouldn't please everyone, that's for sure, but I wouldn't mind," Vuillermoz said of the possibility of riding the Tour without any racing beforehand. "We're living in a special year, and we must know how to adapt to all situations."