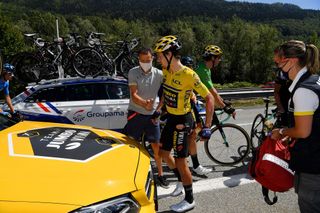 Jumbo-Visma say that they will assess the crash-related injuries sustained by Critérium du Dauphiné race leader Primoz Roglic during stage 4 to the Megève Altiport before deciding whether their team leader will start the final stage.

"You saw him finish the stage, he was still strong, but he was also in quite a lot of pain, with bruises and cuts, so we'll have to wait and see how he is tomorrow," said Jumbo-Visma directeur sportif Grischa Niermann.

He added that he felt that, "Primoz should start tomorrow."

Roglic didn't fulfil the race leader's commitment to do a post-stage interview with the race organisation or make any comments to the media following the stage, so it was unclear why he had crashed.

Teammate Wout van Aert said he had been riding with Roglic just before the incident but hadn't seen what had happened.

"I'd stopped for a piss and Primoz was still on his bike in front of me, but when I came back up all of the cars were all stopped," Van Aert explained.

"At first I thought he was going to quit the race because he seemed really dizzy. I said, 'Come on, let's keep on going.' And when we got back in the bunch I could immediately see that he was clear in his head, that he was ready to race and that was really good to see. He's a big champion and even with a few scratches he continued and kept his focus on his job."

Roglic looked set to abandon when he got into the Jumbo-Visma team car for a short period but emerged after a few moments and got back on his bike.

"Like I said, he looked a bit dizzy, a bit shocked. But I stayed with him and I think the bunch slowed down because the yellow jersey had crashed,"van Aert said.

Asked about the damage to Roglic and his co-leader Steven Kruijswijk, who was forced to abandon with a separated shoulder in a separate crash, Niermann said: "Of course we have riders in reserve, but I hope that our A team, our first eight riders will be going to the Tour. They are our strongest line-up but we have a strong team in general and we will find a replacement rider, but I don't want to think about that at the moment.

"Anything can happen," he continued. "Before today we had seven riders here who were 100 per cent fit and now we have two riders we have some doubts about. If that had happened in the Tour, Stevie would be out. Primoz should start tomorrow, but it's always good to have multiple options. I just hope we don't have any more of these nasty crashes."