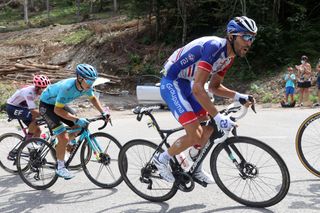 Groupama-FDJ leader Thibaut Pinot will miss this Sunday's French national championships road race in Grand-Champ, Brittany, in order to rest his back, which he injured after crashing on stage 4 of the Critérium du Dauphiné on Saturday. Meanwhile, key domestique David Gaudu is also in a fight to regain fitness following digestive problems, and will start the Tour du Limousin on Tuesday.

The Dauphiné crash in which Pinot was involved brought down a number of riders, including Jumbo-Visma's Steven Kruijswijk, causing the Dutchman to immediately quit the race with a dislocated shoulder. Kruijswijk's teammate, and then race leader, Primoz Roglic also crashed later on the stage, and was a non-starter for the final stage on Sunday – which meant that that race lead passed to Pinot.

Groupama-FDJ reported on Monday that Pinot would now miss Sunday's French-title road race, and would instead use the opportunity to try to rest his back and fully recover ahead of the Tour de France, which starts in Nice on Saturday, August 29.

"Due to back pain following his crash on Saturday's Dauphiné stage, Thibaut Pinot has to take a rest period," the team said in a short statement on social media. "He'll not be able to compete at the French Nationals. He is now fully focused on the Tour de France."

One of Pinot's most trusted lieutenants for the mountain stages at the Tour, David Gaudu, is also in a battle to be fit in time for the race. Gaudu was forced to skip the Critérium du Dauphiné due to digestive problems, and will now instead start the four-day Tour du Limousin on Tuesday (August 18-21) in the hope of rediscovering his form before the Tour de France.

"I feel a lot better, but know that I'll be up against it this week," admitted Gaudu. "Those few days without training or racing have set me back in my preparation, and so it's hard to say where my form is right now. I'm nevertheless confidant and hopeful that I'll be able to build myself up again during the course of this week."

Due to back pain following his crash on Saturday's #Dauphiné stage, @ThibautPinot has to take a rest period. He'll not be able to compete in the French Nats. He is now fully focused on the Tour de France. pic.twitter.com/vEob9voahEAugust 17, 2020