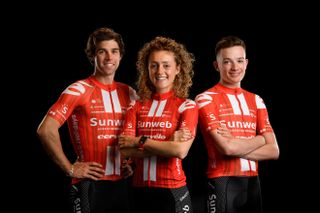 Sunweb riders heading into 2020 must do so without Tom Dumoulin (Image credit: Team Sunweb)

Team Sunweb’s Iwan Spekenbrink is confident that his team can compete for top honors at Grand Tours in future seasons.

Over the last decade, Spekenbrink has transformed his men’s team from a Pro Continental outfit into one of the most stable and successful teams in the current WorldTour. He has also overseen the growth of a women’s programme – which closed 2019 as the second-best team in the world - developed a U23 roster and ensured that the entire organistation confirms to the MPCC guidelines. It’s a portfolio that few other teams can match. However, the loss of Tom Dumoulin to rivals Jumbo-Visma has created a void within the Sunweb ranks ahead of 2020.

Spekenbrink will be hoping that the likes of Michael Matthews can step up and deliver consistent wins but Spekenbrink has also pointed to the raft of young talent that the squad has signed for the future. In total ten riders have joined the team for next year, including Tiesj Benoot, Jasha Sutterlin, and Nico Denz. They have also strengthened with Alberto Dainese, Mark Donovan, Nils Eekhoff, Martin Salmon, and Thymen Aresman.

“We don’t have a number one sprinter but If you look at the guys we have there’s Kanter, Dainese, Bol, Eekhoff and we have guys around them with Kragh Andersen and Arndt,” Spekenbrink told Cyclingnews at Sunweb’s recent team presentation in Amsterdam.

Benoot: It's like the first day of school at Sunweb

Nils Eekhoff: I can’t live in the past

Sutterlin: I want to focus on the Classics

Coryn Rivera: There's no formula for the perfect Spring

There were limited options on the transfer market when Dumoulin informed the team that he wished to break his contract and leave. That left Spekenbrink with the choice of either making a panic signing or putting his faith in youth recruitment.

“Don’t forget that when we were successful with Marcel Kittel, Tom Dumoulin was part of that team and project for three years. Preferably you have guys who can be really strong support but when they get a bit older they can be leaders. Then you secure your present and the future. From the scouting we’ve done in the last few years we have a great pool of talent that will now support and then take over, and with them, we’ll conquer the Grand Tours again. It’s not that we have one replacement with one rider, because it’s a continuous process.”

For 2020 the team will focus on the sprints, Classics and the hope of competing for top-tens in Grand Tours with Wilco Kelderman and Sam Oomen. Riders like Marc Hirschi, Chad Hagan, and Robert Power will also be given greater responsibilities. Spekenbrink may dip his toes in the market next year, however, if the right opportunity or marquee signing comes along.

“If there’s an opportunity to bring someone in for 2021 then we’ll do that. We did that with Michael Matthews and we’ve brought in Wilco who has been top-ten. The younger riders just need a bit of time but they’re really special.”

“Then we have the dream of Grand Tours which started in 2017. We made a lot of progress and that dream is very much alive. With the riders we have, like Wilco, we can do very good GCs but it’s not fair to expect that they can win a Grand Tour. That’s not a realistic option but the pool of guys behind that, and the recruiting that we have, we have the basis for the future. We need a bit of time there."