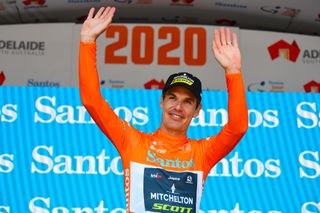 Daryl Impey is back in the ochre jersey after stage 5 (Image credit: Bettini Photo)

While it's rare for a team to take the leader's jersey at a race but still feel as though they're on the back foot, new Tour Down Under leader Daryl Impey and his Mitchelton-Scott team are only too aware that Richie Porte (Trek-Segafredo) has won on Willunga Hill on the last six occasions, and that a seventh victory on the climb on Sunday will almost certainly also secure him overall victory.

The chink of light, hope and determination in the Australian team comes from the fact that Impey has managed to finish close enough to Porte in the last two editions of the race to snatch overall victory. However the South African road race champion's two-second lead that he took over the Australian on Saturday's fifth stage to Victor Harbor is slim, meaning Impey and Mitchelton-Scott will have to produce something special to stop a likely rampant Richie Porte from blowing them away on Willunga Hill and forging his way to victory.

As ever, the Tour Down Under is a mathematician's delight of a race.

The time bonuses on offer on each stage – three, two and one seconds at the intermediate sprints, and ten, six and four seconds at each stage finish – ensure that most editions of the race are decided by seconds. Porte won the race overall by 48 seconds from Esteban Chaves in 2017; Porte and Impey finished on equal time in 2018, with Impey taking the title on stage placings count back. It was Impey again by 13 seconds from Porte last season.

"The whole week we've been trying to get into the lead here to put me in a good position for tomorrow," Impey said after pulling on the ochre leader's jersey on Saturday, to take that two-second lead over Porte into the final stage.

"It's achievable to beat Richie, but two seconds means it is going to be really tight and close. But we've given ourselves the best chance possible," he said.

"The boys have ridden incredibly hard all week, and have done an amazing job. Win, lose or draw tomorrow, we'll know by the end of the race that we gave it everything."

Asked whether chasing the race's bonus seconds each day had taken its toll on him, Impey accepted that it had.

"But I can't think about that," he argued. "We have to take the race by the scruff of the neck, and we've still got Simon Yates in there."

Yates is Mitchelton-Scott's strongest climber. He was unlucky to crash close to the finish in Stirling on stage 2 on Wednesday but seemed to recover sufficiently to stay in contention on the uphill finish to stage 3 at Paracombe. The British rider finished in the same front group as his teammate Impey on Saturday's stage, and remains in fourth place overall, 13 seconds down on Impey, and 11 seconds behind second-placed Porte.

Yates gives Mitchelton-Scott a possible second or alternative option but his odds of pulling it off longer.

"If Simon can follow Richie on Willunga Hill, he's still got a very good chance of winning the race, so we're in the better position, I think," said Impey.

"I think there's one guy in the bike race that can follow Richie, and it's going to be Simon, so who knows? We could win the stage and that could win the overall, or I could handle it. I think we're in a nice position. Whatever happens, if we lose tomorrow, we'll know that we've given it everything, and given ourselves the best chance, so we can be proud of that."

Backs against the wall

While Impey remained buoyed by the achievement of having taken the race lead going into the final stage, his directeur sportif, Matt White, was only too aware of the task the team faces.

"Everyone knows Richie's got great climbing form, and he's going to attack, and Daryl's going to do what he can. And we'll help him as much as we can to try to hang on to the leader's jersey tomorrow, but our backs are certainly against the wall, that's for sure."

Asked by Cyclingnews whether Yates could prove to be their trump card, White was less optimistic than Impey about whether Yates hoovering up the 10 seconds on offer for the stage win could potentially help Impey to take his third title in a row.

"If Richie finished second to Simon, he'd still get six seconds [bonus], and we're leading by two seconds, so it's going to be tight," said White. "Daryl has to finish pretty much with Richie Porte to win the race."

White and Impey did agree that the two intermediate sprints during the final stage, with their bonus seconds – at 63.4km and 103.4km into the 151.5km stage – were both likely to be taken by an early breakaway, meaning that everything would come down to the final uphill sprint to the finish line. Real-time gaps and the time bonuses for the first three riders across the line will mean everything.

"Everyone knows that Richie's going to attack on Willunga with between 1.3km and 1km to go, and we'll see who can hang on," said White.

"I think it's all going to boil down to the last 1.5km, and whoever can climb the fastest will win the Tour Down Under – as simple as that. Willunga will decide the race."