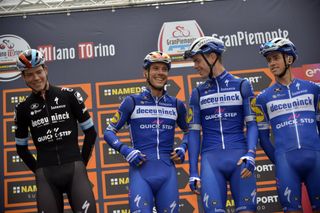 Deceuninck-QuickStep have finished top of the team rankings of the UCI WorldTour for the second successive season after clocking up a total of 68 wins in 2019, including Milan-San Remo, Paris-Roubaix and eight Grand Tour stages.

Julian Alaphilippe was the team’s outstanding performer, racking up twelve victories, including nine at WorldTour level. The Frenchman, who finished the year second in the individual rankings behind Primoz Roglic (Jumbo-Visma), won Milan-San Remo, Flèche Wallonne, Strade Bianche and a brace of stages at the Tour de France, where he wore the yellow jersey for two weeks and finished fifth overall.

In a ranking traditionally dominated by teams that enjoy Grand Tour success, Alaphilippe’s surprising GC challenge in July helped to keep Deceuninck-QuickStep atop the standings in the summer. The Belgian squad had already amassed a huge haul of points after another remarkable cobbled Classics campaign, where Philippe Gilbert claimed Paris-Roubaix and Zdenek Stybar won Omloop Het Nieuwsblad and the E3 BinckBank Classic.

In the final weeks of the campaign, Deceuninck-QuickStep held off the challenge of Bora-Hansgrohe by claiming the Clasica San Sebastian with Remco Evenepoel, the EuroEyes Cyclassics Hamburg with Elia Viviani and five stage wins at the Vuelta a España. Enric Mas brought the curtain down on the season by landing overall victory at the Tour of Guangxi this week.

The Belgian team won 73 races in 2018 but this season included a lot of quality as well as quantity.

“We are very proud of this success, as it wasn’t an easy one,” team manager Patrick Lefevere said in a statement on Wednesday.

“During the season, we had a large buffer over the other teams, but that advantage was sliced towards the end, which on the other hand motivated us even more.

“We aren’t a Grand Tour-orientated team, and that’s were the most points are, so sealing the win in the standings with such a huge haul of points makes this triumph even more remarkable. Rankings don’t normally lie, and a team that wins from January until October is the best one in the world.”

Deceuninck-QuickStep finished the season 400 points clear of Bora-Hansgrohe in the WorldTour team standings, with Jumbo-Visma taking third ahead of UAE Team Emirates.

Sixteen Deceuninck-QuickStep riders tasted victory in 2019, beginning with Viviani’s win on the opening day of the Tour Down Under in January and concluding with Mas’ victory in Guangxi.

“Many have said in the past that if you come here (to Deceuninck-QuickStep), then you won’t win because of others, but looked at what happened this year: 16 of our riders have won a race, which is extraordinary when you think about it,” said Lefevere, who picked out Gilbert’s Paris-Roubaix win and a brace of Alaphilippe achievements as the highlights of the season.

“It’s obviously not easy to pick out just a few, but if I were to name some, I’d say Milano-Sanremo, Paris-Roubaix and the 14 days in yellow at Le Tour. What was the most impressive about the latter was that everybody fought hard to keep it for as long as possible once it landed on Julian’s shoulders for the second time, in Saint-Étienne.”

Although Deceuninck-QuickStep will lose Gilbert to Lotto Soudal, Viviani to Cofidis and Mas to Movistar in 2020, the squad remains strong. Alaphilippe agreed a two-year contract extension, while 19-year-old Remco Evenepoel is tied to the team until the end of the 2023 campaign. Irish sprinter Sam Bennett is hoping to join Deceuninck-QuickStep if he can resolve a contract dispute with Bora-Hansgrohe.

Evenepoel was among the year’s outstanding performers in his first season out of the junior ranks. As well as the Clàsica San Sebastian, the youngster won the European time trial title and placed second in the time trial at the World Championships.

“The young guys exceeded the expectations this year, contributing to our long list of victory and settling into the team, which – with the risk of repeating myself – gives opportunities to every single guy,” Lefevere said.