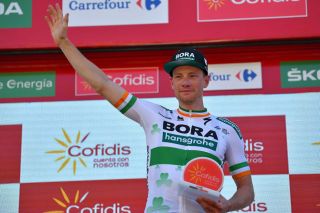 Patrick Lefevere is still none the wiser as to whether Sam Bennett will be a Deceuninck-QuickStep rider in 2020 with the Irishman’s contract situation at Bora-Hansgrohe still unresolved.

However, Lefevere has informed Cyclingnews that the German WorldTour team, who are insistent that Bennett has a deal in place with them for 2020, offered the Irishman as part of a trade that included Alvaro Hodeg going the other way from Deceuninck.

Lefevere turned down the proposal and remains patient as the UCI arbitration system decides whether Bora-Hansgrohe and Bennett do indeed have a valid contract in place for 2020.

Bennett is looking to extradite himself from the team after being snubbed for a place at both the Giro d’Italia and Tour de France this year.

“There’s no development or news. There’s no agreement yet between him and Bora. There were some other proposals but I didn’t accept them. I’m a third party in this and I’m waiting on others,” Lefevere told Cyclingnews on Wednesday.

“They [Bora] were interested in exchanging riders but I refused. They were looking for Hodeg but I’m not interested in trading cattle. I don’t have the balls to go to a young kid of 23 and say I’ve got news, you’re going to Bora next year. First of all we’re not a football team, so we can’t buy and sell a rider.”

Despite uncertainty over his future, Bennett has enjoyed another stellar season on the road, winning two stages of the Vuelta a España, three stages of the BinckBank Tour, a stage in the Critérium du Dauphiné, two stages in Paris-Nice, the Irish national championships and several other races.

With Elia Viviani leaving Lefevere’s team for Cofidis, the Belgian boss is on the lookout for a potential replacement sprinter but for now he is remaining  patient.

When asked if he expected Bennett to race in the blue Deceuninck-QuickStep colours next year, Lefevere replied: “It doesn’t depend on me, it depends on him reaching an agreement with Bora. I can’t take a rider who is under contract. He says that he doesn’t have one, and Bora say that he has. I’m waiting. I’m here in my chair and waiting. That’s all that I can do.”

Cyclingnews contacted Bora-Hansgrohe, but a spokesperson for the team said: “We don’t comment on any speculation or rumours regarding Sam Bennett.”