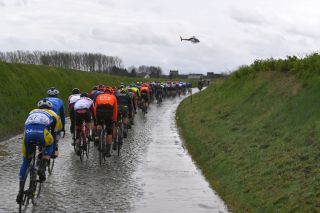 The 2020 Classics season is almost under way, with 'Opening Weekend' kicking off the action. Omloop Het Nieuwsblad was first up on Saturday, while Kuurne-Brussel-Kuurne follows on Sunday. Next up is Le Samyn, which follows on Tuesday.

Once again, Cyclingnews will be bringing you reports, interviews, results and news throughout the Classics, starting with Saturday's race. Read on to find out how to watch Kuurne-Brussel-Kuurne via live stream, no matter your location, with ExpressVPN.

The Kuurne course gets a revamp for 2020, with a different selection of climbs coming in the mid-race section. Nokereberg and Tiegemberg are gone, for example, while the Kanarieberg-Kruisberg-Hotond trio come later on and Oude Kwaremont is the penultimate berg of the day.

The 203km-course, which features 11 hills and five cobbled sectors, still ends with a flat run-in though, with the final 50km not containing any major obstacles.

The Spring Classics are being aired live across Europe via Eurosport and on the Eurosport Player, with British Eurosport showing almost every race live.

In North America, both Fubo.tv and FloBikes are airing a number of Classics throughout the spring, though neither offering is as comprehensive as Eurosport's.

Subscribing to FloBikes cost $150 for the year and gives you access to watch most of the season's biggest races. Fubo.tv, meanwhile is available for a week's free trial, while their most popular package costs $54.99 per month for over 75 channels.

A handful of major races will also be available to view via NBC Sports Gold, which is available for a cut-price fee of $19.99.

In Australia, SBS will show Flanders, Roubaix and the Ardennes triple.

As you might expect, local broadcasters such as Sporza, RTBF and Rai Sport are showing the bulk of the spring Classics live. Feeds will be geo-restricted, mind.