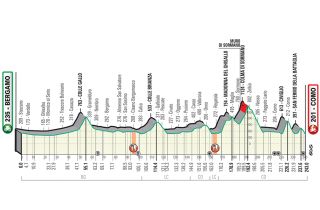 It's the the race of the falling leaves, the final Monument of the season, and the last chance for riders to score a big win before the off-season – Il Lombardia is upon us once again.

Running once again from Bergamo to Como, the challenging 243km course will take in six challenging climbs, including the legendary Madonna di Ghisallo and the brutal Colma di Sormano.

Alaphilippe pulls out of Il Lombardia and ends 2019 season

The race will welcome a star-studded field, with plenty of riders taking to the start in with a shot at victory. Past winners Vincenzo Nibali (Bahrain-Merida), Esteban Chaves (Mitchelton-Scott), Dan Martin (UAE Team Emirates) and Philippe Gilbert (Deceuninck-QuickStep) will be there

Past podium finishers at the race looking to make a step or two up include Dylan Teuns, Alejandro Valverde, Gianni Moscon, Diego Rosa, Rui Costa and Rafał Majka.

Cyclingnews will continue to have full live reports, with news and photos from inside of the race as it happens, along with extensive reporting on the race. We're also your go-to place for results, photos and highlights once the stage is done.

While you follow our text-based live coverage, you can also keep an eye on the action with live streaming video from just about anywhere, even if you don't live in a broadcast zone. Here are some suggested places to watch the live streaming from your computer, phone, tablet or other internet-connected device.

Il Lombardia is being broadcast in the UK on Eurosport, which can be found in basic Sky TV packages. With a Eurosport Player monthly or annual pass, you can access the live stream from just about any internet-connected device. You can try it out for free.

Il Lombardia 2019 is being shown live online daily online streaming at Fubo.TV. Fubo.tv has a broad sports offering with dozens of different networks in a package that costs $19.99 to try for a month, then $44.99 per month beyond that. To view the Vuelta, you need to also purchase the International Sports package for $11.99 per month for US customers to be able to access the races.

In the US the race will also be streaming on FloBikes.com witth the 'pro pass' (starting at $12.50 per month). Flo Bikes can be viewed on web browsers as well as on Roku, Apple TV or via iOS app.

In Canada, the race live stream will also be available on Flobikes.com for $150 annually or $30 on a month-to-month basis, and offers races you can't get on Fubo.tv, such as cyclo-cross races, special interest videos, interviews and more.