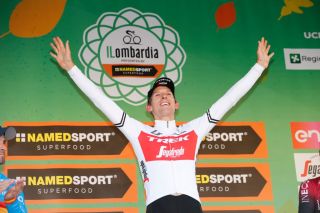 Saturday brings the second Monument of the season, Il Lombardia, where Deceuninck-QuickStep phenomenon Remco Evenepoel makes a bid for his first victory in cycling's top tier of Classics.

The Race of the Falling Leaves, a misnomer given the race is coming two months earlier than usual, will see a number of other big names take the start, including past winner Vincenzo Nibali and his Trek-Segafredo teammate, reigning champion Bauke Mollema.

Cyclingnews will be bringing you full live coverage, reports, results, news and analysis before, during and after Gran Piemonte. Read on to find out how to watch the race via live stream, no matter your location, with ExpressVPN.

Crowds limited at Il Lombardia due to COVID-19 risks

The Trek-Segafredo duo will be joined by Italian climber Giulio Ciccone for the race, while Evenepoel has João Almeida, who has been impressive since the restart, on his side.

Mathieu van der Poel of Alpecin-Fenix is another big name to keep an eye on, as are Team Ineos climbers Richard Carapaz and Tao Geoghegan Hart, and Astana's Jakob Fuglang and the in-form Aleksandr Vlasov. Jumbo-Visma's George Bennett is in top form after his Gran Piemonte win and will be one to watch.

Fabio Aru and Diego Ulissi, second in Gran Piemonte, will lead UAE Team Emirates' charge. Another Italian, Lombardo Davide Villella who took fifth in 2016, is there for Movistar.

Tim Wellens, fifth at the race two years ago, leads Lotto Soudal, while Wilco Kelderman (Team Sunweb), Jesùs Herrada (Cofidis) and Mikel Nieve (Mitchelton-Scott) are have been in good form since the restart.

The race has been reduced by 12km for 2020, though all the major climbs are still in there, from the Madonna del Ghisallo and Muro di Sormano to the finale of Civiglio and San Fermo della Battaglia.

Check below for all the details of how to watch all the action at Gran Piemonte.

Il Lombardia will be aired comprehensively across a number of networks, and will be aired live across Europe, Asia and Australia via Eurosport and on the Eurosport Player.

The GCN Race Pass, available on the GCN app, is also airing the race in the UK and Australia. Access in the UK will set you back £6.99 per month or £39.99 for a year, although a special offer currently lets you subscribe for just £19.99. The special offer in Australia – until August 12 – is AU$59.99.

The race will also be shown on various broadcasters around Europe, with Rai Sport carrying the rights in Italy, RTBF in Belgium and L'Equipe TV in France.