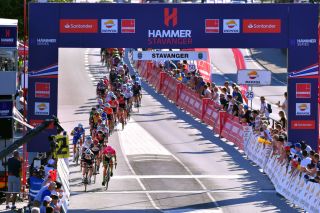 Hammer Stavanger announced Friday that it will include a first-ever women's category as part of its three-race event held on May 22-24 in 2020 in Norway. The women will compete on the same courses as the men's teams for the Hammer Climb, Hammer Sprint and the Hammer Chase where an overall winning team is crowned.

"From a Hammer Series perspective we’ve always wanted to bring in women’s racing as we think having both men’s and women’s teams would bring a very special atmosphere to Hammer Races and the Series overall," Velon CEO Graham Bartlett told Cyclingnews.

The Hammer Series was developed by Velon, a company that produces rider data, videos and social media content to increase engagement in professional cycling. There are currently three rounds at Stavanger (May), Limburg  (June) and Hong Kong (October), with a new venue set up in Colombia next February.

"We had planned with our race organiser partners in Colombia to hold a Women’s Hammer race there in February but unfortunately Hammer Colombia has proved not to be possible next year," Bartlett said.

Hammer Stavanger took over the launch of the women's event for 2020, but Bartlett said the aim is to develop a series.

Each Hammer Series event includes a Climb, Sprint and Chase held on short circuits. In the Hammer Climb and Hammer Sprint, the riders fight for points for their teams every time they cross the finish line. At the end of each day, the team with the most points combined wins the discipline.

The Hammer Chase is a team time trial pursuit. The team topping the leaderboard after the first two disciplines starts first with the other teams following at a fixed time interval. The first team to cross the finish line for the final time wins the overall Hammer race.

Teams also accumulate points during each event and those with the most points at the end of the series are crowned the overall winners.

"Yes we will use same routes," he said. "I think the format will work very well with the way women racing often is, the Hammer down and all out.  We will talk with riders, teams and Velon about smaller adjustments so it works as good for the women as for the men."

Hegreberg also works for Tour des Fjords AS which runs Hammer Stavanger. The company also organised the former Tour des Fjords from 2013 until 2018, and now organises Tour of Norway since 2019 after the two events merged.

He said the move to launch a women's race at Hammer Series fit well with their other events, logistically.

"Tour des Fjords started in 2013, and after first edition we have had plans to include women, but in traditional races you have do double up most things, so there was no room for it.

"Hammer Series is perfect for it. We can use same cars, people and structures for both races. We have been talking with Velon to do this since first edition in 2018."

We have exciting news! 🙌🔨@HammerStavanger is back in 2020 with a women's race on the same days and same routes as the men's! 🚴🏻‍♀️🚴🏻‍♂️The event will take place from the 22nd to the 24th of May 2020.#HammerSeries #HammerStavanger pic.twitter.com/qygffSYWpaOctober 11, 2019