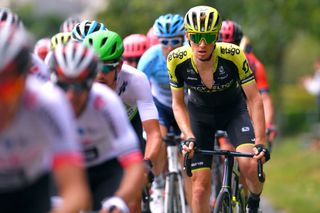 Mitchelton-Scott's Jack Haig took another step closer to landing a big win this season when he finished third at the Bretagne Classic-Ouest France one-day WorldTour race on Sunday, having made the final selection of three riders, but in the end having to settle for the final place on the podium.

The Australian was overpowered by winner Sep Vanmarcke (EF Education First) and Lotto Soudal's Tiesj Benoot at the 284km race in Brittany, France, but was left buoyed by the experience of having been able to be in the mix.

"I had quite good legs today, and it's the type of racing I enjoy," Haig said on his team's website. "You really need to be in a good position all day, really fighting up there, and if you can be aggressive, it can lead to better racing. The parcours isn't for sitting back and waiting. On these small, narrow roads you need to be attacking and up the front, which is what I like to do."

The 25-year-old is still searching for the second win of his pro career, having taken his first back in 2017 on a stage of the Tour de Pologne, during his second season as a pro.

"The plan was for the guys like me and Lucas Hamilton – the guys who don't have the best sprint – to be aggressive," he continued. "Unfortunately, Matteo [Trentin] had a puncture on one of the gravel sections; otherwise he would have been there for the sprint.

"The final was a bit tricky, but it was nice to have just three of us in the breakaway, as then we worked well together, all knowing we would be on the podium. Unfortunately, in the last kilometre, I got stuck on the front with Benoot on my wheel, and then Vanmarcke was away, but all in all I can be happy with the outcome," he said.

Haig has been with Mitchelton-Scott since turning pro in 2016, and enjoys the full support of his teammates and management team, which has seen him riding his first Tour de France – and fifth Grand Tour – for the World Tour team this year.

He has been particularly successful this season, finishing seventh overall at the Volta a la Comunitat Valenciana and sixth at the Ruta del Sol in February, followed by an impressive fourth overall at Paris-Nice in March, which all helped to pave the way for his selection for the Tour, where he rode in support of Adam Yates.

"It was a great ride by Jack," said sports director Mat Hayman, who retired as a rider on the team just last season. "He gave it everything, and of course he was going for the win, but he was with two guys out there who have won quite a lot of races, so hats off to him. Today we were going to give everybody an opportunity, and he grabbed hold of that."