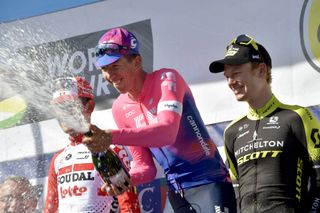 Sep Vanmarcke's win at the Bretagne Classic-Ouest France on Sunday will go some way to banishing the Belgian's memories of an unlucky and injury-hit spring, which culminated in him finishing fourth at Paris-Roubaix, sobbing inconsolably after a jammed rear derailleur had prevented him from competing for the win at the famous Roubaix velodrome.

Somewhat surprisingly, given the 31-year-old's experience and impressive palmarès, Sunday's victory at the Bretagne Classic in Plouay was the EF Education First rider's first win at WorldTour level, and puts him firmly back on track following a frustrating first half of 2019.

The year had begun promisingly enough when Vanmarcke won a stage at the Tour du Haut Var in February. But a crash at the E3 BinckBank Classic in March saw him injure his knee, and he sat out Gent-Wevelgem and Dwars door Vlaanderen as a result. He returned to racing just over a week after his crash, first testing his knee out at the Tour of Flanders – where he finished 25th – and then at Scheldeprijs a few days before Roubaix.

The rest appeared to have done him good, and Vanmarcke rode was able to ride strongly at 'The Hell of the North' – and looked likely to perhaps even better his second place of 2013. However, the untimely mechanical problem – on the infamous Carrefour de l'Arbre section of cobbles with just 14km to go – saw him finish Roubaix in fourth place for the third time in his career.

Since Roubaix, Vanmarcke's races have included the Tour of Norway, the Tour de Suisse and the BinckBank Tour in August, where he finished 12th overall, showing signs of a return to form in time for the French one-day race, even though he admitted that he'd been disappointed that he hadn't done better there.

"After the spring Classics, I asked the team not to take me to the Tour de France," Vanmarcke told Het Nieuwsblad. "I wanted to start afresh at the BinckBank Tour, but it didn't really work out there. The results were not forthcoming, and so I left somewhat disappointed. So I came to Plouay with a lot of doubts – but apparently that wasn't necessary."

Vanmarcke made it into the decisive split with 80km to go of the 284km event, and then got away with Lotto Soudal's Tiesj Benoot and Jack Haig (Mitchelton-Scott), who made up the podium in that order after Vanmarcke was able to jump away from them in the final kilometre to take the win by three seconds.

"I knew thatif I survived the last climb at 5km to go, I had a big chance to win," a delighted Vanmarcke said on the EF Education First website.

"I'm super happy about this win. I had to work long and hard and be patient to get a big win like this. I'm proud I could finally do it," he said.

Team manager Jonathan Vaughters added: "Sep is a guy who I can see being truly motivated to win because he knows the team needs it to lift everyone's morale. It's testament to the strength of this organisation. Everyone pulls each other up in the bad times. It's a beautiful thing to be a part of."