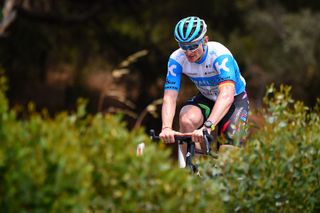 Israel Start-Up Nation’s André Greipel trains on the roads around Adelaide ahead of the start of the 2020 Tour Down Under (Image credit: Bettini Photo)

New Israel Start-Up Nation signing André Greipel says that he's hoping to rediscover his sprinting shape of old and will get an indication of how his form is coming along at the Schwalbe Classic circuit race in Adelaide, South Australia, on Sunday, and at next week's Tour Down Under when it starts on Tuesday.

"I'm going to find out what kind of form I'm in during the race, so hopefully I'm going well," said the 2008 and 2010 Tour Down Under winner at a press event on Saturday.

"I trained well and hard over the winter, so hopefully it turns out that I'm in good condition."

The 37-year-old rather surprisingly suggested that he had "no goals" for the coming week, despite Australia offers him and his sprint rivals – including Caleb Ewan (Lotto Soudal), Sam Bennett (Deceuninck-Quick Step) and European road race champion Elia Viviani (Cofidis) – up to five opportunities to show what they can do.

Two-time Tour Down Under champion André Greipel returns to Australia

"I just want to enjoy racing and riding the bike, and also ride well together as a team," Greipel added.

While that may sound slightly unambitious, Greipel is pragmatic. He wants to use the race as a starting point to at least try to rediscover his old, race-winning form during the course of the season, which has seen him win 11 Tour de France stages, seven stages at the Giro d'Italia and four Vuelta a España stages over an illustrious 15-year career as a pro.

He has 156 victories on his palmares but won just a stage at the La Tropicale Amissa Bongo race in Africa during his disappointing season with Arkea Samsic.

"I've won a lot of races in my career; there's not so much to prove. But I want to get back into the same shape I was in before," he said.

"At the end of the day, we just ride bikes; we can't change the world. But I really still enjoy it, and hopefully this season will turn out well."

Some might argue with the notion that sports stars have little effect on world affairs.

However a number of Australian and international athletes across various sports have helped raise awareness and dug deep into their own pockets to help Australia's bushfire relief effort. The Tour Down Under will also contribute in no small way, with race sponsor Santos matching public donations. The teams taking part in Sunday's Schwalbe Classic pledging all the prize money to those affected by the fires, and various riders providing signed jerseys for auction.

"We'd of course seen the news about the fires in the media before we came here," said the German sprinter of the aftermath of bushfires that swept through parts of the Adelaide Hills, and continue to burn in the states of New South Wales and Victoria.

"But to see it with your own eyes when we were out training, and to see all the properties that have burned down, and also all the nature... A lot of animals got killed by the fires as well, so for sure it's something really sad to see."

Asked what he liked about the race to return for what is his ninth start in Adelaide, Greipel replied simply: "The weather, the atmosphere, and also the race... I've been quite successful here, and it was always a good start for me for a successful season, so I'm hoping for the best for 2020.

"It's nice to be back," he said with a smile, "and a nice opportunity to start the season well."