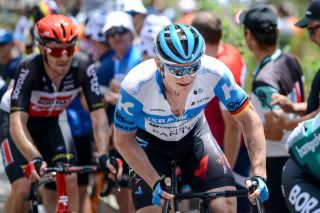 When Israel Start-Up Nation announced last month that it had handed André Greipel a two-year contract extension, it was met with some surprise, not least because Greipel himself had earmarked December 31 as the date of his retirement.

However, the German sprinter will now race into his 40s and, speaking to Cyclingnews en route to a training camp in Belgium, seems as motivated as ever.

"First of all, I have to say I don't need anyone to tell me when to stop. People have said I'm stupid to keep going, but after a good start to the season I showed I'm still around and able to sprint," he said.

Indeed, Greipel did not win a race in the early part of the 2020 season, but felt buoyed enough about his two top-five placings at the Tour Down Under to regain his enthusiasm after a dire year at Arkéa-Samsic.

Greipel and Sutherland prepare for return to racing from injury

However, he was halted in his tracks, first by a shoulder fracture and dislocation suffered in a training crash on his return to Europe in February, then by the suspension of the season due to the coronavirus pandemic. It left him with a sense of unfinished business.

"After the crash, and with the coronavirus lockdown, all that was stopped. After two or three weeks, I thought, 'Come on, André, this is your childhood dream,'" he explained.

"It all came back to my mind, and I didn't want to stop like that because of the coronavirus because at that point no one knew if we would race again this year. I wanted to stop with a number on my back."

In Israel Start-Up Nation's announcement of the contract extension, reference was made to Greipel's "experience" and how he was a "great mentor to the younger riders".

However, it doesn't appear that he is moving aside to enjoy a quieter life as a support act in the final chapter of his career. The competitive spirit that has brought him more than 150 victories still burns bright, and he's racing on to add to that tally.

"The numbers on my power meter are the same as five or six years ago. I don't see myself going down," he said. "I still want to win bike races. My characteristic is to be competitive. I still like to suffer in training. Of course, the new sprinting generation is super fast, so everything needs to be at 100 per cent if I want to win races."

Greipel, whose shoulder is now "almost perfect again" after continual rehabilitation, will resume his season at the Tour de l'Ain from August 7-9, followed by the Critérium du Dauphiné the week after.

It's yet to be set in stone, but it's a schedule that seems to lead to the start of the Tour de France in Nice on August 29.

"I hope I can be in the selection for the Tour, so that's why I'm doing the French programme," Greipel said.

"I haven't set myself any specific goals in any particular races. I just want to enjoy the racing," he added.

With Greipel extending his career into 2021, he'll be racing alongside Chris Froome, whose transfer from Team Ineos was announced last week. Greipel, who has been linked with a post-retirement move into a directing role, saw the signing of the four-time Tour de France champion as a statement of intent.

"To be honest, by signing someone like Chris Froome, it shows how ambitious the team is," he said.

"They want to step up further and further, and be competitive at the highest level on every terrain. It's also really positive regarding potential sponsors."