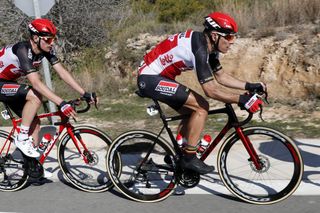 And so the countdown continues. There are less than 50 days to go before the starting-flag drops at the 2020 Milan-San Remo and Philippe Gilbert (Lotto-Soudal) knows only too well that in the meantime, the speculation about his chances of victory in La Primavera will do nothing but increase.

This is the year, after all, when Gilbert could join the absolute greats of Classic racing: riders who have won all five Monuments in their career. And although Gilbert has at least three opportunities over his three-year contract with Lotto-Soudal - at 37, March 21, 2020 is surely the best of those chances.

At the Volta a la Comunitat Valenciana, though, a relaxed-looking Gilbert has all the appearance of a man enjoying the last few days before a media storm he knows he will surely face kicks in with a vengeance.

Wellens: I don't have the leadership in me like Gilbert does

Gilbert hits back at Degenkolb doubters

Before the stage 2 start in Torrent, just south of Valencia, you could count the number of journalists that wandered past the Lotto-Soudal team bus showing interest in interviews with any riders, Gilbert or otherwise, on the fingers of one hand. Then when an enormous 'crocodile' of Spanish schoolchildren trundled past in the morning sunshine during his interview with Cyclingnews, even they stayed unusually and inexplicably quiet. A Het Nieuwsblad start - this definitely wasn't.

But it turns out that for Gilbert, all is right with the world: his winter team switch from Deceuninck-QuickStep to Lotto-Soudal could not have gone more smoothly. His focus in the spring will not just be on San Remo but on all his races, starting with Valencia, and his race condition is as good as expected for this time of year. Even Valencia's somewhat fraught first stage, his first race day of the season, was thankfully incident-free.

"I've not been sick at any stage so I could train properly, too," Gilbert tells Cyclingnews. "Then yesterday [stage 1] went well, even if everybody was really fresh and able to take more risks than usual, so it was really dangerous. But in the end, it worked out fine.

"My condition is as good as it was this time last year, if you look at the numbers and so on. So I'm happy with that, too. Then my morale is good, too, because we have a good team, not just the riders, but also the staff - everything is perfect."

The biggest potential spanner in the works, maybe, were the reports a few weeks back that the Poggio might have to be bypassed in this year's San Remo because the road is not currently in good enough condition for racing. But Gilbert, who lives nearby and for whom the inclusion of the classic springboard for late Primavera attacks is critical, insists this is cycling's version of fake news.

"I don't know where those reports came from, I went to see the climb myself in training and it's absolutely fine," Gilbert, who staged a memorable attack on the Poggio in 2007 in one of his 15 participations (without a single DNF) to date in San Remo, tells Cyclingnews. "I honestly don't know what they are talking about. There are no changes there at all."

However, when asked if he hopes to repeat his 2007 attack when the peloton hits the famous Italian climb in five weeks time, Gilbert skirts the issue, saying "there are a lot of other races before then.

"I know though, that the pressure will be enormous and I will try to do my best before San Remo, there's a lot of other races, and the right way is to go step by step."

It is also true, he agrees, that in the years where he has done best in San Remo, taking third in 2008 and again in 2011, he had taken a big win beforehand.

Twelve years ago, he headed into La Primavera with a win in Omloop Het Nieuwsblad in the bag, and nine years ago, he'd already triumphed in Strade Bianche. And the former world champion makes no bones of insisting that he will be looking to impact this spring well before the Italian Monument.

Another race that features large on Gilbert's mental map of 2020, is undoubtedly Liège-Bastogne-Liège - Gilbert's home event, and which he won in his memorable 2011 season, the year he triumphed in all the Ardennes Classics from Flèche Brabançonne through to La Doyenne. Coincidentally or not, that year was the last time he raced in Lotto colours as well.

"But these races are a long way away," Gilbert insists. "For now, I'm looking at this week and the opportunities there are here." San Remo, then, can wait for a little while. But Gilbert, like everybody else, knows that the clock is ticking.