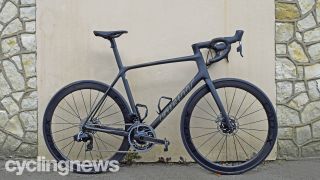 One of the cycling industry's worst-kept secrets of the past year, the new Giant TCR, is finally made official today as Giant announced its latest road bike range.

While the cycling - and wider - world is in unfamiliar and unprecedented territory, Giant has treated us all to a semblance of normality with the launch of its new TCR, in which it claims improvements in aerodynamics, stiffness and weight.

The new TCR is said to offer class-leading efficiency. It is also the first TCR to be developed in a wind tunnel, helping it to take a major leap forward in aerodynamic performance with a claimed 140g shaved from the entire frameset (size medium). If it lives up to Giant's promises, it'll be a shoo-in for our guide to the best lightweight bikes.

"This TCR is significantly more aerodynamic than the previous generation while retaining its best-in-class stiffness-to-weight ratio” claims Giant Road Category Manager Nixon Huang. “Every tube shape has been modified to reduce drag, and we did that without compromising the qualities that have made TCR a leading pro-level race bike for two decades.”

As with the outgoing TCR, there are three different frame options available. All of which are constructed with carbon fibre, and share the same monikers as their forebears: Advanced, Advanced Pro, and Advanced SL. (All three of which are available in both rim and disc-brake variants).

Compared to its predecessor, the frame has been given aerodynamically optimised, truncated ellipse tubing throughout, and the down tube has grown in diameter from 54mm to 65mm.

In order to improve upon the previous model and remain competitive, Giant developed new manufacturing processes when making the new TCR. Straying from its normal hand-laid carbon process, Giant opted in favour of robots to lay the smallest 150 laser-cut carbon swatches. This helped to increase accuracy and remove the requirement for tolerances that ultimately add up to increased carbon fibre and more weight.

Disc brake variants get internal routing through the fork which, along with the stays, is now symmetrical to allow for greater airflow and wider clearances. In fact, there is now a roomy - but not excessive - 32mm of tyre clearance, although rim brake options are limited by the caliper to just 28mm. All bikes are delivered from the factory with a full tubeless setup with the exact wheel-tyre combination being dependent on the model chosen.

The top-level Advanced SL frameset is compatible with electronic groupsets only, however even Campagnolo EPS is incompatible due to the requirement for larger frame entry ports. Therefore, you're limited to Shimano or wireless SRAM in your groupset choice.

To test its claims, Giant pitted its new TCR against three main competitors. The Trek Emonda SLR Disc, Specialized S-Works Tarmac Disc and the Cervelo R5 Disc. When testing aerodynamic efficiency the TCR produced the least aerodynamic drag, on average, across all yaw angles (-15 to +15 degrees). It is also claimed to save 34 seconds on the previous TCR over 40km at 200 watts.

In terms of weight, Giant admits the TCR loses out to the Emonda by 17 grams, but comes in 105 grams lighter than the Tarmac and 322 grams better off than the R5. It makes up for this on stiffness, however. Using Tour Magazine's testing protocol, Giant claims 26% more stiffness when compared to the Emonda, 16.6% over the R5 and 9.8% more than the Tarmac.

The range-topping Advanced SL 0, equipped with SRAM Force eTap is given a lightweight finish which Giant calls ThinLine Finishing Technology. This uses just three coats, vs the usual eight, and saves a further 65 grams across a frame and fork.

CCC-Team have been using the new TCR for a while already and Cyclingnews got first-hand experience of the new TCR's feathery weight when we took a closer look at Simon Geschke's rim-brake-equipped TCR at the Tour Down Under, the WorldTour season opener in Adelaide, where 400g of weights had been added to bring Geschke's bike up to the 6.8kg UCI weight limit. That's not the first we saw of the new TCR, however. A pre-production model was first spotted in the late-2019 season classics underneath Greg van Avermaert, who went on to use the disc-brake-equipped TCR at the World Championships in Yorkshire.

In all there are 10 models of the new TCR, plus three frameset options available.

While the official announcement of the bike is made today, due to the ongoing coronavirus pandemic, various territories including the UK, Europe, USA and Australia, are delaying dealer launch until early May.

Pricing is therefore unconfirmed at this stage, however, Cyclingnews is told the range-topping Advanced SL 0, with Cadex 42 tubeless wheels and SRAM Red eTap AXS groupset, will retail at $11,000.