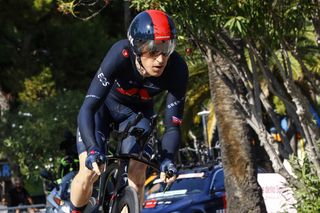 Team Ineos had planned all year to send a trio of overall contenders to the Tour de France but after subpar performances from Geraint Thomas and Chris Froome in the post-coronavirus-lockdown races, the British team placed all their bets on young Egan Bernal, the defending champion.

The strategy appeared to backfire on Sunday as the Colombian cracked on the Grand Colombier and lost 7:20 to Tour de France leader Primož Roglič (Jumbo-Visma), while on the same day Thomas headed toward the overall podium in Tirreno-Adriatico.

The unfolding of events led former Team Sky and 2012 Tour de France winner Bradley Wiggins, now a commentator for Eurosport, to level harsh criticism against Ineos principal David Brailsford and to speculate that the riders had no input in the decisions that were made on who would race the 2020 Tour de France.

Before the Tour de France, Wiggins suggested Thomas would have certainly had a say in the decision and would have been the first to admit that his form - as evidence by his subpar performances in Tour de l'Ain and the Critérium du Dauphiné - was not where it should be to be competitive in the Tour.

But Wiggins reversed his opinion after Sunday's stage, suggesting Thomas was unwillingly left off the Tour de France squad and relegated to racing the Giro d'Italia.

Refusing to be drawn into the argument, Thomas pointed to his second-place overall in Tirreno-Adriatico as evidence that his form is good and said he's now excited to be leading the team for the Giro d'Italia in October.

"For me, I'm just focussed on the Giro," Thomas said when asked about the Tour de France selection, now in hindsight. "That was the call we made and that's all I'm thinking about. Ifs and buts, you can spend all day questioning things. That's the call that was made and I'm really excited about the Giro now. That's my main goal."

He admitted that watching Bernal lose all hopes of a good overall placing in the Tour de France stage on Sunday "wasn't nice to see."

"Egan is a teammate but also a good friend. I've been through a lot with him. He helped me win the Tour and I was with him when he won his," Thomas said. "We all know what it's like as athletes when you train for something and it doesn't quite go to plan. He obviously has a lot of pressure on him. He'll come back stronger. He's still so young and talented. He'll be back fighting for the overall again."

Thomas put in a solid time trial on the final 10.5km stage of Tirreno-Adriatico, leapfrogging Rafal Majka (Bora-Hansgrohe) to take second overall to Simon Yates (Mitchelton-Scott) and more than halving his 39-second deficit to Yates.

Although he said Tirreno-Adriatico was suited to a different type of rider than the upcoming Giro d'Italia will be, the performance gave him a big morale boost ahead of his major objective.

"Just the feeling I've had on the bike - hopefully I'll improve after this. I'm really looking forward to a good October. It's going to be competitive but I'm confident I'll be in good shape."