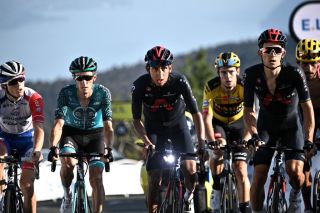 Egan Bernal’s bid for a second Tour de France victory in as many years ground to a halt on Sunday as the Colombian champion lost over seven minutes to leader Primož Roglič in a defeat that was as definitive as it was spectacular.

Thirteen kilometres from the summit of the Grand Colombier and well before many of the top names had dropped behind, the Ineos Grenadiers leader slid out of the back of a group of perhaps 30 riders.

There was a brief moment of symbolic racing unity as Nairo Quintana (Arkea-Samsic), another of Colombia’s top contenders and widely viewed as the pioneer of recent Tour success for Bernal dropped behind almost at the same time.

But that instant evaporated when Quintana then disappeared up the road, escorted by Warren Barguil, finding the pacemaking set by Bernal’s teammates Michal Kwiatkowski and Jonathan Castroviejo too slow.

“From the first climb I wasn’t going well, I was almost dropped there” Bernal recognsied afterwards. “All day I’ve been lacking in power, I feel like I’ve lost three years of my life. But that’s cycling, it’s like that.”

On the climb itself, he said, “I was waiting for a miracle that obviously failed to happen.” He finally crossed the line in 25th place, more than seven minutes down.

Bernal has had a rollercoaster Tour from the first week onwards, only losing time because of bonuses to Roglič on Orcieres-Merlette on stage 4, looking weaker on the first day in the Pyrenees but holding his own, then staying with Roglič and Pogačar on the second. Le Puy Mary was a setback where he ceded 30 seconds, before making a brief charge off the front in Lyon that if quickly resolved by Jumbo-Visma, at least showed he was not going to throw in the towel.

But the Grand Colombier was another story altogether. Was it his back injury, that had forced him to abandon the Dauphiné a month ago that had caused him to fall out of the running so decisively?

“Yes and no,” Bernal said. “It wasn’t the best way to start the Tour,  it has been hurting throughout the race, and I’ll have to pay some attention to that, but I can’t blame what happened today for that. Today it was more the legs that hurt, rather than my back.”

Bernal’s defeat also ends a lengthy era of domination by Ineos Grenadiers, albeit with a different sponsor as Sky, in the Tour’s overall classification, stretching back to 2012. Only in 2014, when Chris Froome crashed out, have Ineos not won the Tour. On more than one occasion, as recently as last year with Bernal and Geraint Thomas, they have taken the top two spots overall.

As for where he goes from here, Bernal was not even remotely optimistic about battling for a top three position in Paris.

“A Tour podium is not an option” he said, before adding that he did not known for certain what his exact time losses were. But the damage, regardless, was so great that at this point in the game, it barely mattered.