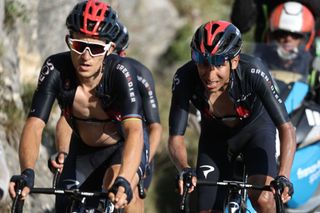 Egan Bernal's defence of his Tour de France title took a huge hit on stage 15 on the Grand Colombier, with the Colombian losing contact with the group led by Jumbo-Visma's Wout van Aert with just under 14km to go on the 17.4km ascent.

The Colombier was the first major high-mountain summit finish of the Tour de France and the biggest test of the overall contenders. Van Aert, setting pace for overall leader Primož Roglič, ripped the favourites to shreds, jettisoning both Bernal, Nairo Quintana (Arkéa-Samsic) and Guillaume Martin (Cofidis) before pulling off and giving control to George Bennett and then Tom Dumoulin to continue the decimating pace.

Bernal quickly lost more and more ground despite being helped by Michal Kwiatkowski and Jonathan Castroviejo, ceding two minutes with 7.5km still to go. By the finish, the gap had ballooned to 7:20 and his overall hopes gone.

Roglic: My eyes will be on everyone at the Tour de France

"It's difficult to say how I felt, the feeling was that I was empty - I had no power. When the other riders did a big acceleration, I couldn't go too hard to follow, but then I recovered really quickly, but my body couldn't react as normal.

"I'm the number one and I tried to give my best, but finally there were riders who were stronger than me."

It was the second day that Bernal struggled against the might of Jumbo-Visma: after holding Roglič to only time bonuses in the difficult first half of the Tour, Bernal showed signs of trouble on the stage to Puy Mary on stage 13, losing 38 seconds on the climb. He put in a dig on stage 14 that was ultimately unsuccessful but seemed to show he was ready to fight for the Tour de France title.

Bernal was Ineos Grenadiers' sole leader for the Tour de France after four-time overall winner Chris Froome and 2018 champion Geraint Thomas were left off the team, having failed to perform in the Critérium du Dauphiné.

The team are now out of the top 10 with Tadej Pogacar (UAE Team Emirates) in second at 40 seconds and Rigoberto Uran (EF Pro Cycling) replacing Bernal in third at 1:34.

"Even if I start the last climb with the other GC riders I felt I would be dropped, I wanted to give my best, not just for me, but for the team and for the respect I have for the race," Bernal said.

"There's no excuses, I tried to fuel my body in the best way possible, but I don't know, I didn't have the legs. The other riders have been stronger than me and we have to accept that."