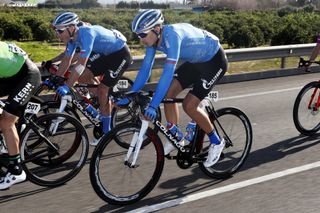 The Gazprom-RusVelo team have confirmed that Dmitry Strakhov has tested positive for the coronavirus Covid-19 in the United Arab Emirates after undergoing a fifth test.

Strakhov said he is in good health but is in hospital. He is the first rider to be named as positive after the UAE Tour was cut short and all riders and staff on the raced were held in hotels during testing.

Around 500 people were allowed to leave the UAE after a few days, and the Cofidis and Groupama-FDJ teams were released at the weekend. However, the Gazprom and UAE Team Emirates squads and staff from the UAE Tour remain in quarantine in the W Abu Dhabi - Yas Island hotel.

Local authorities initially confirmed two cases of the coronavirus in a team and then raised the number to six, revealing they were two Russians, two Italians, one German and one Colombian. Last week, La Gazzetta dello Sport reported that there were 12 cases linked to the UAE Tour, with four riders reportedly positive for the virus. Some have been taken to specialist medical units, with the Italian consulate saying that all the Italians are well and not in a serious condition.

The identity of the four riders positive for the coronavirus are not known. However, Fernando Gaviria is suspected of being one of them. Only two Colombian riders were at the UAE Tour and Hernando Bohórquez of Astana was allowed to leave the country.

Gazprom rider Igor Boev has confirmed to Russian media that he is in hospital but it is unclear if he has tested positive for the coronavirus.

"After passing the fifth test at the hotel, they told me that I have a positive result for coronavirus and I need to go to the hospital," 24-year-old Strakhov is reported as saying in an Instagram post by the team.

"True, I did not see the results of the analyzes. The hospital conducted additional tests, took a blood test and promised to report the results in the near future. I'm waiting. I feel fine, I followed and continue to follow all safety measures, I hope that this situation will be resolved soon."

"Despite being given the green light to travel home and the last tests carried out coming back negative, our team has decided to extend their stay in the UAE to continue testing everyone’s conditions and go home only with the safety of non-contagion," the team said on Sunday.

"In the context of this global emergency, the main goal is the safety of all of us and our family members. In light of some known cases of flu within our group and other teams, we will be tested again in the next few days and once the situation has improved, riders and staff will return to their families."

There has been no further communication from the team. Diego Ulissi was at the UAE Tour and so was unable to be present at the birth of his daughter Anna on Tuesday.

Riders and staff have posted messages on social media in recent days as they await the end of their quarantine. Tadej Pogačar wrote on his personal website, saying: "Today, March 9, 2020 is the 11th day that I remain locked in 'my' hotel room. It’s not really mine alone, as I share it with teammate Erik Bystrøm.

"We got training machines at our room, so we try to train at least a little. Of course, there is a TV, internet, Netflix and Playstation, so we can at least do something and pass the time.

"I only hope that things will go as planned and I will be able to go home at the end of next week."

Jeroen Swart, the head of medical at UAE Team Emirates, posted a photo of himself wearing a protective mask at the W Abu Dhabi - Yas Island on Tuesday and photos of other team staff. Their quarantine is expected to end on March 14.

UAE Team Emirates have already joined a number of other major teams who have decided to withdraw from all racing until late March.