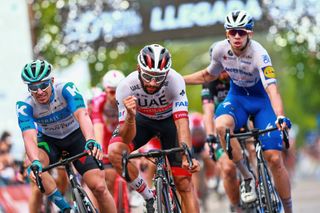 Fernando Gaviria's sheer quality has seen him stitch together two stage wins so far this week, but on the opening day in San Juan, his preferred route to the line was a touch too perilous and he came home in 9th place. He had no complaints. He hasn't forgotten that he used to be on the other side of the velvet rope.

"It's normal that they risk more because normally the season for them finishes here, while we are only starting here," the UAE Team Emirates sprinter said in San Juan this week. "All the young riders want to get to the WorldTour, so they try to do the maximum here. I did, too, in 2015. But it's normal. Argentina opened my door and got me into the WorldTour."

Five years have now passed since Gaviria streaked away from Mark Cavendish on the opening stage of the Tour de San Luis. He was a callow 20-year-old on the Colombian national team, and some of the beaten men murmured afterwards that they had been caught out by the absence of distance markers in the final kilometre. Gaviria won again in Juana Koslay two days later and there were no complaints, only compliments. By year's end, he had joined Quick-Step, effectively as Cavendish's replacement.

Gaviria has enjoyed successful returns to Argentina every January since, but nowadays, his season is judged purely on what he achieves on European roads. "Before my goal was to win stages in San Juan and San Luis and now my goals are a little bit higher, to win Classics or stages in the Grand Tours," Gaviria said.

Last season was a case in point. Gaviria picked up his habitual two wins in San Juan, but he would only collect four more in what proved a difficult debut season at UAE Team Emirates, where a knee injury forced him to miss the Tour de France. "In the end I still took six wins, and my performance was regular, but I never felt I was in my top condition," Gaviria admitted.

Gaviria flitted readily between Spanish and English when he sat down with a group of reporters at his hotel on the morning of the time trial stage of the Vuelta a San Juan. Whatever the language, his deadpan timing was always on point.

Asked if he will miss the racing on the track in an Olympic year, Gaviria thought a moment and then said: "No." Asked his hopes for the Tour, he was concise. "Win," Gaviria said, and pauses: "Win lots of stages." The Tour will be his only Grand Tour in 2020. Who decided his programme? "The team," Gaviria said.

The Classics, meanwhile, will again form the focus of the first part of Gaviria's season. In 2016, his remarkable start to professional life saw him line up for his debut Milan-San Remo already listed among the favourites for victory. He duly arrived on the Via Roma seemingly in a winning position only to crash within sight of the line. The winning move has gone clear on the Poggio every year since, but La Primavera remains the centrepiece of his spring.

"San Remo is really difficult to win with all the climbers. Last year they went full gas on the Poggio and there were no sprinters left in front, but we'll try again this year," said Gaviria, who will continue to explore his prospects in the cobbled Classics in 2020.

A year ago, he helped teammate Alexander Kristoff to victory at Gent-Wevelgem and then made a low-key Tour of Flanders debut before illness forced him to withdraw from a maiden Paris-Roubaix appearance on the morning of the race. Gaviria's Classics potential has been touted since his tenure at Quick-Step, but his list of results on the cobbles thus far is a meagre one.

"For sure, I want to win the Classics and also Paris-Roubaix, but I've never done it," he said. "Last year, I tried but I couldn't start because I woke up with a temperature of 40 degrees and the doctor said, 'No, you cannot start.' This year I hope to be there, see the cobblestones and try to arrive there on the track.

"I'll try to do my best in the Classics, but we also have Kristoff. Maybe I can help him there because he is stronger in this part of the season. We will see."

Gaviria's record in the bunch sprints at the Grand Tours is rather more imposing. He won four stages on his Giro d’Italia debut in 2017 and then picked up the first two stages in his first Tour a year later. Even during his troubled 2019, he collected a Giro win in Orbetello following Elia Viviani's disqualification. Small wonder, then, that he is reluctant to sacrifice finishing speed in his bid to bolster his Classics endurance.

"We have to keep a balance, because you never know," Gaviria said. "Maybe you could get the power to try to ride 50k alone, but then maybe you could come to the finish of Flanders with twenty riders, and then you'd need the speed for the sprint."

In 2019, Gaviria lined out at the Giro after the Classics, but this time out, a period of rest is built into his calendar in late April before he turns his attention towards the Tour, where he enjoyed such a sparkling opening weekend two years ago.

"The Classics are important, but all the world sees the Tour, and I think that's important for the team," he said. "But we'll try for both."