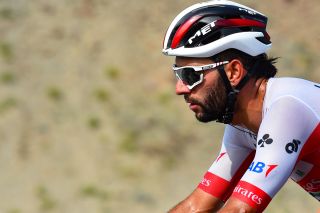 Gaviria announced that he'd tested positive for COVID-19 on March 12, following the conclusion of the UAE Tour at the end of February, which finished two days early once it was clear that the virus had hit the race entourage, with two staff members of one of the teams initially having been announced as having tested positive.

A number of teams' riders and staff – including those from French WorldTour teams Cofidis and Groupama-FDJ – were then forced to stay at their race hotel in Abu Dhabi to undergo further medical tests until finally being given the all-clear to be able to leave on March 8, while Gaviria's UAE Team Emirates squad remained at the race hotel voluntarily. Their 25-year-old sprinter's positive test for the coronavirus was subsequently announced, while Russian ProTeam Gazprom-RusVelo announced that their rider Dmitry Strakhov had also tested positive for the virus.

After being released from hospital on March 27, Gaviria returned to his home country from the UAE on April 8, and following an unspecified quarantine period in Colombia's capital, Bogota, he was able to return to his hometown of La Ceja, close to Medellín.

Now, Gaviria is training again, although the only indication so far of when competition will recommence is the provisional dates of the Tour de France – August 29-September 20 – with the expected announcement about the rest of the 2020 season that was expected on Wednesday now delayed until May 5.

"This virus is turning out to be more serious than we could have imagined," Gaviria said in a video update posted on Instagram on Wednesday. "For me, personally, it has caused me a few distressing days. But I'm home, feeling good, and getting back into training.

"I'm training from home because there are vulnerable people who we need to protect in these times," he said. "I'm sending my support to them and everyone, and [am hoping] that this all ends soon."