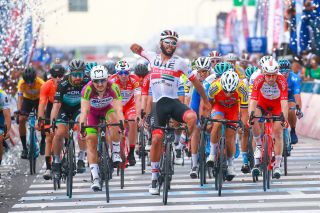 Fernando Gaviria has announced he has been released from hospital in the UAE and is trying to find a flight home to Colombia after recovering from the coronavirus Covid-19.

The UAE Team Emirates sprinter was taken to hospital after the UAE Tour was ended on February 27 and his team went into voluntary quarantine.

Gaviria was presumed to have been diagnosed with the virus soon afterwards, when the UAE Ministry of Health and Prevention confirmed six cases at the recent UAE Tour, citing one Colombian. Only two Colombian riders were at the UAE Tour and Hernando Bohórquez of Astana was allowed to leave the country after the first round of tests.

Gaviria later confirmed the news on March 13 in a video message from a UAE hospital. He seemed to suffer only mild symptoms and was given the green light to leave hospital on Thursday night after a series of three negative tests for Covid-19.

"The last tests they did were negative and the doctors have discharged me from the hospital. I am now focused on being able to go home and meet with my family," Gaviria said in a message posted on Instagram, posting a photograph of him with other UAE Team Emirates staff and friends.

On Wednesday, Gaviria's lead-out man and close friend Max Richeze announced he had been released from a hospital in the UAE after testing negative for the coronavirus Covid-19. He has since joined his family in Monaco.

The UAE Tour was cancelled with two stages remaining due to suspected cases of Covid-19 on the race, and all riders, support staff, race organisation and media were placed in isolation in their Abu Dhabi hotels pending testing.

Two days later, 18 of the 22 competing teams were permitted to leave the United Arab Emirates, but Gazprom-Rusvelo, Cofidis and Groupama-FDJ remained in lockdown after staying on the same hotel floor, while UAE Team Emirates announced that their riders and staff were remaining in voluntary quarantine in the country. Cofidis and Groupama-FDJ were given the green light to leave on March 8.

Since then, the coronavirus pandemic has spread across the globe, with a growing number of countries in lockdown to try to limit the spread of the virus and limit its impact on victims who need intensive treatment.

Gaviria was grateful for the treatment he had received in the UAE.

"I want to thank all the health team that has taken care of me in the United Arab Emirates, for their excellent work and dedication, and all those who have supported me during this period of convalescence and recovery," he said in his message.

"I hope and wish that this extraordinary situation will pass soon, so that I can return to normality."