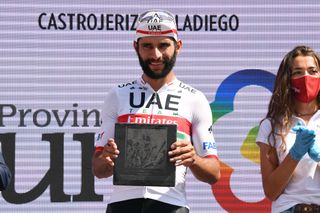 In the first big bunch sprint of the 'new normality' it was business as usual for Colombia's Fernando Gaviria (UAE Team Emirates) , who picked up at the Vuelta a Burgos from where he had left off in the Vuelta a  San Juan, adding his fourth win of the season to his hat-trick in January in Argentina.

CCC, Deceuninck-QuickStep and finally Groupama-FDJ had all tried to keep their riders at the front of the line as the peloton roared down the final, fast descent into Villadiego.

Gaviria was a match for all of them, streaking past the French train without any difficulty and taking a victory by several bike lengths ahead of Arnaud Démare (Groupama-FDJ) and Sam Bennett (Deceuninck-Quick Step).

For Gaviria and Team UAE, victory concluded what had been a fraught day at the office in the best of styles, given the events of the morning of stage 2.

Three of his teammates - Sebastian Molano, Cristian Muñoz and Camilo Ardila  -  were all sent home on Wednesday morning after it was discovered they had had contact with a person who subsequently tested positive for COVID-19. All three had returned double negative PCR results for COVID-19 before Burgos, but the team opted to take them out of the race a precaution.

"It was a difficult decision for the whole team because Molano is a rider who could have helped me greatly in this finish," Gaviria said afterwards, "but these are decisions that have to be taken.

"We couldn't risk anything bad happening to all the riders and all the teams. These are protocols that we have to follow.

"It was difficult but I stayed focussed and tried to take the victory. I had checked out the corner twice" -  earlier on the stage when it crossed through the finish town -  "and then when I took the corner I was really in front and I went full gas to the finish."

Gaviria had no doubts about to whom he dedicated the win:  "It was a victory for all the team because it's a really difficult moment for all the peloton, we haven't raced for a long time."

Gaviria was amazed, to say the least, when asked if he had been involved or affected by the crash that affected some riders in the last big right hand corner, with around 500 metres to go. It turned out he hadn't even seen it.

"¿Caída? ¿Donde?" - Fall, Where? - Gaviria asked incredulously in Spanish when the question was posed. "No." he then answered, shortly.

"For sure it's one of the sweetest tasting victories this year, because of the whole hiatus and what's happened with the virus. After being stuck at home not knowing if we'd be racing again at all this year, being able to claim a victory here is just great," Gaviria added.

"We didn't do any work to control the breakaway because we were three riders down.  But still, we were able to count on legs and luck, and at the right moment we came together to do a good sprint and get the win."

Gaviria will have another chance at bunch sprint win on Friday, although the terrain is arguably harder, with an uphill drag in the last kilometre. But to judge by Wednesday's performance, that shouldn't present too much of a problem.