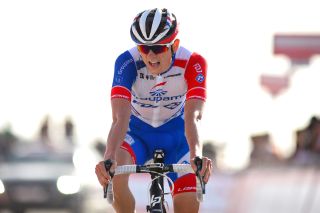 David Gaudu (Groupama-FDJ) put in a hugely spirited performance on stage 5 of the UAE Tour to finish fourth atop Jebel Hafeet for the second time in three days. The result keeps Gaudu in fourth overall and 15 seconds off a podium place with two days to go.

The young French climber, who will ride as Thibaut Pinot's wingman in the mountains during this year's Tour de France, formed part of an elite group on the final climb of today's stage.

He followed and attacked when Adam Yates, Tadej Pogačar and Alexey Lutsenko blew the race apart and, along with Ilnur Zakarin, the quintet effectively decided the stage between them with Pogačar coming out on top in a close sprint. Lutsenko finished second with Yates in third.

"That climb was really hard. At the bottom of the climb, we were racing at full speed and then after around 5km, Yates and Pogacar started attacking one after the other," Gaudu told Cyclingnews as he recovered at the top of the climb. "I came back with Lutsenko and then when they attacked again I tried to come back without Lutsenko but he managed to make it back with me,"

With Pogačar and Yates clearly the strongest, Gaudu wisely recognized that his best bet was to try and drop Lutsenko and then bridge over to his other two rivals.

"I wanted to let Pogačar and Yates go clear so that I could then bridge on my own without Lutsenko but he matched me and then it was too late.

"In the sprint, I gave it all I had, so tonight I've got no regrets."

Gaudu came into the UAE Tour as FDJ's main GC hope after finishing third last year. The 23-year-old has forged a reputation as one of France's most promising stage race riders, with a stage win in last year's Tour de Romandie and 13th overall in last year's Tour. He also won the Tour de l'Avenir in 2016.

He told Cyclingnews that he was satisfied with his UAE Tour so far and that, while he isn't giving up complete hope of a podium place, he and the rest of the team would focus on supporting Arnaud Démare in the last two sprint stages.

"I've had a good week. We've still got two more days and tomorrow it could be a windy day. I'm looking forward to the last two days. I think it's going to be very hard to make the podium but we don't know what's going to happen. In the next couple of days, we hope that Démare can win a stage for us."

After the UAE Tour, the FDJ climber returns home before taking a short break. He has a busy spring ahead before dialling his attention in on the Tour de France, where he will once again link up with Pinot. The pair have worked well together in races and spent time in Tenerife earlier this year.

"After this, I have a bit of a break then I'll come back to racing with a few events including Pais Vasco and the Ardennes. I think then I'll do the Dauphine, nationals and then the Tour de France," Gaudu told Cyclingnews.

"I'll be at the Tour for Pinot and to help him in the mountains. We've been working together a lot and we were in Tenerife in January. I think that's why I'm going well here."