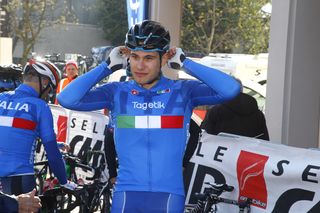 Filippo Ganna begins his 2020 campaign at the Vuelta a San Juan in the blue of the Italian national team rather than his usual Team Ineos kit. Only fitting, perhaps, in an Olympic year, even if it remains to be seen where and when he will wear that maglia azzurra in Tokyo in late July and early August.

As the locomotive of a rapidly improving Italian team pursuit outfit, Ganna has spent four years building towards performing on the track at the Tokyo 2020 Olympics. After claiming a bronze medal in the time trial at the World Championships in Yorkshire last September, however, he began to think more seriously about also lining out on the road in Japan.

Ganna has options, but he would rather not have to make a choice at all. For now, all he knows is that any decision will be postponed until after his Giro d'Italia debut in May when his countdown to Tokyo begins in earnest.

"It's still to be decided. We'll definitely wait until the Giro and then see how my condition is at that point. Once we have an idea of what my condition is after the Giro, we'll decide on whether to focus on just one event or both," Ganna told Cyclingnews.

In November, buoyed by his world record in the individual pursuit and his bronze medal in Yorkshire, Ganna told La Gazzetta dello Sport that he planned to ride both the time trial and team pursuit in Japan.

That certainly remains his preference, but Italian road coach Davide Cassani suggested at the turn of the year that Ganna might consider limiting himself to the track given the hilly nature of the time trial route and the sheer complexity of cramming two such disparate events into such a tight schedule. The men's time trial takes place on Wednesday, July 29 (competitors must also be included in their national teams for the road race on Saturday, July 25), while the men's team pursuit qualifying gets underway on Monday, August 3.

"I'd like to do both, but logically, if your physique doesn't allow you to do that, then you can't, so we'll wait until after the Giro. Once that's done, we'll decide on what to do," said Ganna.

"After the Giro, there are two months until the Olympics, and that time will give us the time and the space to do specific work for the track and regain the strength that you need for the starts and so on."

Ganna is among the favourites for Tuesday's 15.1km time trial, but his racing schedule beyond the Vuelta a San Juan is still painted only in broad brush strokes. At this juncture, the only certainties on his schedule are the Track World Championships in Berlin in late February and the Giro.

In Berlin, Ganna will be seeking a fourth rainbow jersey in the individual pursuit and he will be the overwhelming favourite after lowering the world record to 4:02.647 at the World Cup in Minsk in November.

He has made his peace with the discipline's ongoing, lamented absence from the Olympic programme – "With three specialities, it would be too much," he smiled – but the Berlin Worlds will also be an opportunity for the Italian quartet to take stock of their place in the team pursuit cosmos.

The azzurri were bronze medallists in 2017 and 2018, and European silver medallists a year ago. Six months out from Tokyo, they appear to be in a four-way tussle for the three podium spots with Australia, Denmark and Great Britain. Some nations have tended to make dramatic improvements in the months between the Worlds and the Olympics, which perhaps limits the usefulness of Berlin as a form guide.

"That's still a big question mark but we just need to keep concentrated on what we're doing ourselves," Ganna said. "We can't lose our focus. We need to keep the objective in mind."

Whatever his eventual schedule in Japan, 2020 will mark the end of a cycle for Ganna. His decision to join Ineos last season was inspired largely by the experience of compatriot Elia Viviani, who was given the leeway to combine road and track duties during his tenure with the team, which yielded gold in the omnium at the Rio 2016 Olympics.

Ineos have afforded Ganna similar freedom in designing his approach to Tokyo, but the 23-year-old knows that a trade-off will come in 2021 when Ineos will have a heavier hand in dictating his racing schedule and might well nudge him in the direction of exploring his possibilities as a stage race rider.

"It's a very good partnership," Ganna said. "They've left me free to build my programme specifically around Tokyo this year, so next season I'll be a bit more focused on the road and on races with the team."