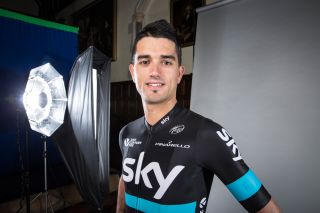 Beñat Intxausti announced the end of his career as a professional cyclist at a press conference in the Seguros headquarters in Bilbao on Monday. The Basque rider raced with Team Sky from 2016 to 2018 after leaving a five-year stint with Movistar. His time with Sky was plagued by repeated issues with the Epstein Barr virus (mononucleosis).

The 33-year-old signed last year with Euskadi-Murias in hopes of recovering and rejoining the WorldTour but said he could not get back to his former level.

"I couldn't get back to the level I had before, or the level I wanted to get. It hasn't been possible, as long as I've tried. Now it's time to announce that this is where my career has ended. I'm satisfied and proud of what I've achieved," Intxausti said, according to Biciciclismo.

Intxausti: This was a special year but it has fallen apart

Intxausti could miss Giro d'Italia due to mononucleosis

Intxausti's biggest year was 2013 when he led the Giro d'Italia for one day, won a stage and finished eighth overall and a stage and the overall in the Tour of Beijing. He won another Giro stage in 2015 before signing with Team Sky.

That would be his last win, as the viral infection in 2016 wrecked his season. He tried dabbling in cyclo-cross in the off-season to regain form before a third bout with the disease hit. Team Sky were patient but in 2018 Intxausti finished only one race - the Hammer Stavanger and started two others.

"After a long time since the disease, with recoveries and relapses, this past year I took it as a last chance. Now I look forward with optimism," he said. "I have several things in mind, my future is open, and I face them with the same enthusiasm as on the bike. I hope to achieve my new goals and dreams."

Gaviria kicks off 2020 in Vuelta a San Juan

Fernando Gaviria will kick start his season at the Vuelta a San Juan on January 26 as he aims to add to his record of five stage wins in the 2.Pro-ranked event. The UAE Team Emirates sprinter will have Argentine champion Max Richeze back at his service as the last man in the lead-out train this season.

The seven-stage event has ample opportunities for the fast men, and Gaviria will have no shortage of competition with the likes of Peter Sagan (Bora-Hansgrohe) and Julian Alaphilippe (Deceuninck-Quickstep) in the field before and after the two key general classification days - the stage 3 individual time trial and stage 5 to Alto Colorado.

"I'm excited to be coming back to race in Argentina. Last year we started the season well here with victory on stage 1," Gaviria said in a press release. "The level of sprinters is always very high so it acts as a good test in the early part of the season. We are coming to the race well prepared."

It will be the first test of the new sprint train, with Richeze and Gaviria reunited after a year apart, having been teammates last with Quickstep in 2018.

"It's true, this year I will have an extra motivation because Maximiliano Richeze will be by my side," Gaviria added. "He is a very important person in my career and in UAE Team Emirates we are happy to have him with us. With him in the team, we will have even more encouragement from the fans too, because for them Richeze is an example for the locals."

With the 15.5km time trial mid-race, McNulty is the team's designated GC leader. The American won the Giro di Sardinia in 2019.

Movistar will debut two neo-pros in the Vuelta a San Juan. The Spanish team will field three newcomers including neo-pros Ińigo Elosegui and Johan Jacobs and track specialist Sebastian Mora.

The 38th edition of the race moves into the UCI's new 2.Pro rating this season, beginning on January 26 with a punchy opening stage around San Juan, a pan-flat sprint stage in Pocito and a 15.5km individual time trial in Ullum which has a sharp climb over the Punta Negra dam in the second half.

Stage 4 from Jáchal to Valle Fértil is the race's longest with a mid-stage category 1 climb before a gentle downhill to the finish. The queen stage to Alto Colorado follows on stage 5, and on stage 6 a sharp uphill finish could shake up the GC if it's close. The final circuit in San Juan is one for the sprinters, with crosswinds and high temperatures additional factors for the peloton.