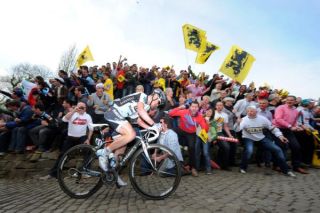 Tour of Flanders CEO Thomas Van Den Spiegel has welcomed the UCI’s unveiling of a revised WorldTour calendar on Tuesday but the Belgian stressed that plans to resume racing in the Autumn remain provisional due to the coronavirus pandemic.

The spread of COVID-19 interrupted the cycling season in March and caused the Spring Classics to be postponed. New dates have now been found for the races in the Autumn, with three Monuments – the Tour of Flanders, Paris-Roubaix and Liège-Bastogne-Liège – all set to take place in October during the rescheduled Giro d’Italia.

Flanders Classics events Gent-Wevelgem and the Tour of Flanders are fixed for October 11 and October 18, respectively, while Dwars door Vlaanderen is set to take place on Wednesday, October 14. Paris-Roubaix, including a new women's edition of the race, is scheduled to take place on October 25.

"The many consultations between all parties involved in cycling of the past months have paid off", Van Den Spiegel said in a statement on Tuesday. "Today the UCI provided clarity and that's a positive. This calendar gives us a new goal to work towards. It's good to be able to get back to work, but at the same time we are aware of the current situation.

"Therefore, these dates are not a certainty, but still provisional. We will continue to monitor the situation and the final decision will of course depend on the measures that will be in place in our country at that time.”

Belgium has barred all mass gatherings until at least August 31 and the UCI has not scheduled WorldTour events in the country until September 30, when the ASO-organised Flèche Wallonne is on the calendar. Liège-Bastogne-Liège follows on October 4.

Flanders Classics confirmed on Tuesday that the route of 2020 edition of Gent-Wevelgem on October 11 will not see the race cross the French border as originally planned.

"The traditional passage over French roads will no longer be included for this edition. Due to the impact of the COVID-19 virus, it is not appropriate to organize a competition that crosses the national border," Flanders Classics said in a statement, though the organiser vowed that "the DNA of the race" would be preserved, with the Moeren, Plugstreets and Kemmelberg all set to feature.

Flanders Classics also noted that only the elite men’s and elite women’s editions of Gent-Wevelgem will take place in 2020, with the under-17, junior, and under-23 races all cancelled.

"There are still too few certainties about the possible entry of 700 youth cyclists from all over the world to be able to make commitments in the short term," the organisation said.

Gent-Wevelgem is scheduled to take place the day after Amstel Gold Race on the revised UCI calendar. Flanders Classics said that it was in talks with Amstel Gold Race director Leo van Vliet with a view to coordinating their events.

"Both organisers are talking together to turn it into a logical, well-organised 'two-day cycling festival',” the statement said. "This is especially important for the women's peloton as they have less staff, logistics and riders at their disposal."