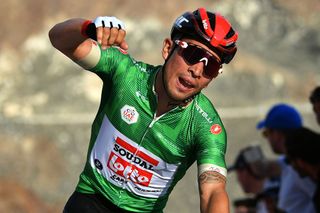 Lotto Soudal's Caleb Ewan took the overall lead at the UAE Tour by winning the stage 2 sprint at the top of Hatta Dam on Monday, when he out-kicked Deceuninck-QuickStep's Sam Bennett at the line to take the stage honours.

With five stages still remaining, Ewan now leads Bennett in the general classification by 12 seconds, while Groupama-FDJ's Arnaud Démare is third at 16 seconds.

"It's always nice to lead a Tour," Ewan said after the stage. "I led the Tour Down Under earlier this year, and now I'm leading the UAE Tour. So the season is going well so far."

Caleb Ewan: As a sprinter you always want to overachieve

Ewan could face a difficult challenge keeping his race lead on Tuesday, when the race finishes with the climb up Jebel Hafeet, where Alejandro Valverde (Movistar) won last year. The race finishes there again on stage 5, but more sprint opportunities could present themselves on stages 4, 6 and 7.

In the meantime, Ewan will enjoy Monday's victory and the leader's jersey that came long with it.

Ewan put in extra effort for Monday's win after Bennett hit out early at the bottom of the climb, forcing the Australian to come from behind and surge past him at the line.

"It was a really tough finish," Ewan said. "We thought that it might be a little bit harder than last year as the profile looked to be harder, but there was no wind, so it was pretty straightforward."

There was nothing straightforward for the sprinters on the path to Hatta Dam, however. The 168km stage started in Hatta and featured a series of climbs on the way out, then again on the way back, and just before the finale at the namesake dam.

Ewan was able to rely on his team to keep in contact on the ascents and put him in the proper place for the final climb to the dam.

"The last climbs were really hard, of course, but my team did just a great job to drop me off in that final corner, and in the best position possible," he said. "I have to thank them for this victory."

Monday's win is Ewan's third of 2020 for Lotto Soudal after he opened his season with two stage wins at the Tour Down Under. He was second to Bora-Hansgrohe's Pascal Ackermann on the stage 1 opener of the UAE Tour on Sunday.