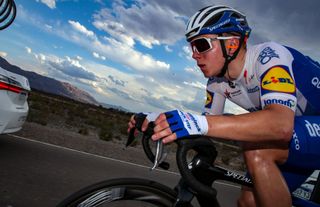 Deceuninck-QuickStep’s Remco Evenepoel in action on stage 1 of the 2020 Vuelta a San Juan in Argentina (Image credit: Bettini Photo)

Remco Evenepoel rode for 300km on Sunday in the first of a series of weekly personal challenges aimed to stay motivated during the COVID-19 pandemic and to raise funds for medical charities.

The 20-year-old Belgian called for challenges on social media, with fans also suggesting he make an attempt at Everesting on the home trainer or somewhere in Belgium, or riding Muur van Geraardsbergen 10 times.

Last week, Geraint Thomas completed three 12-hour rides in his garage, raising over £325,000 for the British National Health System (NHS) and other riders have helped raised funds and called for donations to help fight COVID-19.

"I'm doing crazy challenges to show my support for the hospitals and everyone who takes care of us and helps in this current situation," Evenepoel said.

Lefevere: Evenepoel will follow a different race programme in 2021

"The hardest part (of the COVID-19 lockdown) is that we don't have a concrete goal in the cycling calendar. The big question remains: when can everything start again? It'll be a long time until the cycling season starts, so it's difficult to stay focused, that's why I'll do a crazy 'challenge.' It's something to look forward to and give me some goals.

Evenepoel completed his 300km ride in nine hours and 40 minutes after carbo-loading with rice, a streak and a huge portion of carrots on Saturday night. He got up at 6:30 am and left home at 8:00 am.

He celebrated and recovered with a plate of what he called 'penne-Evenepoel', a Belgian take on pasta, using béchamel sauce and chicken cubes.

"My challenge is done, and I'm done as well," he said in a video of his ride after clocking up 301km.

"In the beginning it was not so bad, because there was no wind but as the ride progressed it got harder with the wind in my face. But in the end it worked out quite well," he told Sporza.

"On the way I ate a bar every hour. Every now and then I stopped at the bakery for a rice cake or jam square. You have to, otherwise you won't make it if you're on the bike for almost 10 hours."

Evenepoel revealed he had several good suggestions for his next challenges but refused to reveal the next one.

"People can still send ideas but I will be fine for the next few weeks in that regard. I'm not going to reveal yet what those challenges are, I can only say that the second is really tough."

This week Evenepoel will line-up with several of his Deceuninck-QuickStep teammates for the Digital Swiss 5 virtual races on the Rouvy platform.

19 leading teams will participate in the five races over five days starting on Wednesday, April 22. Organised by Velon and the Tour de Suisse along with Rouvy, the indoor platform riders will be using, the races will feature three riders from each team, with teams given the ability to change their line-ups from day to day.