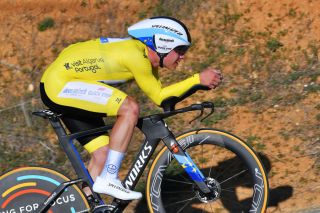 Deceuninck-QuickStep's Remco Evenepoel says his big goal of the 2020 season is now the World Championships in Aigle and Martigny, in Switzerland, in September, although the Vuelta a España could potentially be on the cards as the first Grand Tour of his career.

Twenty-year-old Evenepoel was due to make his Grand Tour debut at the Giro d'Italia from May 9-31, but the Italian stage race has now been postponed, while the Belgian's biggest goal of the season – the Olympic Games, where he was set to represent his nation in both the individual time trial and the road race in July – has also had to be put on the backburner, likely for another 12 months.

"The World Championships are now my big goal," Evenepoel told the Belgian media, including HLN.be and Nieuwsblad.be, via conference call on Thursday. "Doing the Vuelta could be a possibility, as it finishes two weeks before the start of the Worlds, but I'd have to think very carefully about my recovery. Look at Primoz Roglic [Jumbo-Visma] last year: he won the Vuelta, but then wasn't as strong at the Worlds.

Evenepoel in shock over Olympic postponement

"So there's a 90 per cent chance that I won't now do a Grand Tour this year," he admitted. "That's a bit of a shame, but there are plenty of other races that I may be able to do before the Worlds. I could do the Deutschland Tour, like last year, or maybe the BinckBank Tour.

"It's hard to plan, though, because it's important that the coronavirus is 100 per cent gone before we start racing again. I do have one big advantage, though: I can normally get back into race shape after just two weeks of intensive training," said Evenepoel.

So far in 2020, the second-year pro has managed 12 days of racing, of which three have been stage wins, across two stage races – the Vuelta a San Juan in Argnetina and the Volta ao Algarve in Portugal – both of which Evenepoel won overall.

It's an impressive strike rate, even for a rider being touted as Belgium's 'new Eddy Merckx'. However, while 'The Cannibal' won the Tour de France and the Giro d'Italia each five times, and the Vuelta once, during his career, Evenepoel has yet to ride a Grand Tour at all, having been due to this year's Giro.

'The Olympics will again be my big goal next season'

On Thursday, Cyclingnews published what could be the 'post-coronavirus calendar' for the rest of the season, with the Tour potentially still taking place from June 27-July 19 – although possibly 'behind closed doors', as French sports minister Roxana Maracineanu said this week could happen – with the Vuelta a España running from August 14-September 9, and then the Giro being put back to October, potentially running from October 3-25.

Evenepoel also repeated on Thursday what he had already said earlier this week: that he won't be riding the Tour de France, whenever, and if, it happens this year.

"I don't have enough experience to make the Tour my first Grand Tour. It's the most difficult stage race of them all, and we've always said that I wouldn't do it as my first GT, so we'll stick to that," he reiterated. "And then, next year, I'll be able to use my first Grand Tour [the Giro] as preparation for the Olympic Games, as they will again be my big goal for next season."