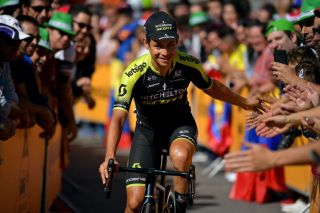 Esteban Chaves has signed a two-year contract extension at Mitchelton-Scott. The deal will carry the 29-year-old until the end of the 2021 season, with a team he has already spent the last seven years on.

Chaves, twice a podium finisher in Grand Tours, and the 2016 winner of Il Lombardia, agreed terms with Mitchelton-Scott earlier in the season with the deal already in the works ahead of this year's Vuelta a España.

Chaves on the comeback trail at Vuelta a España

"I'm really happy, I've always felt good with this organisation, with this team, with the boys, with everyone, we're like a big family, so I'm happy to be staying here for another two-years,' Chaves said in a statement released by his team.

The 2019 season was all about Chaves trying to rebuild his career after two difficult back-to-back campaigns that were blighted by illness and injury. He missed most of 2018 due to a virus but returned this year to win a mountain stage at the Giro d'Italia in impressive fashion. His Vuelta a España challenge fell away in the second week but the Colombian was content with how 2019 developed.

"I'm happy with my 2019 season, every month and every race we were one step up, so that is super important. The team from the beginning have looked after me really well and have given me confidence. The experience this year was awesome and we're working step by step to get back to my best level."

Mitchelton Scott took a chance on Chaves in 2014, just after he sustained a career-threatening injury. He has enjoyed the best years of his career with the squad and he intends to repay their faith in him over the next two years.

Mitchelon-Scott have yet to announce or finalise their Grand Tour plans for 2020 but it's likely that Chaves will once again split his duties between leadership and a key support role for one or both of the Yates brothers. Matt White, who signed Chaves to the team several years ago believes that the 29-year-old's progression in 2019 is an indication that he can find his best form in the future.

"There's a lot of positives to take out of this season for Esteban. His health has been really good this year and we know that when he can get back to the level he is capable of competing at, he can win at any race on the calendar," White said.

"Esteban is really motivated to achieve a lot more goals in different areas as well, and we could see some surprises in his calendar for next year."