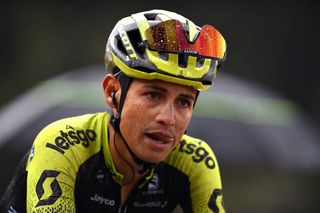 Chaves on the comeback trail at Vuelta a Espana

Nieve confident of teammate Chaves' chances for Vuelta a Espana

Mitchelton-Scott's Esteban Chaves has seen his general-classification chances at the Vuelta a España take a considerable knock after a mechanical problem on stage 9 on Sunday forced him to borrow bikes from his taller teammates to chase back to the group of main contenders.

Chaves ran into trouble on the climb of the Coll de la Gallina, but Australian teammate Damien Howson was on hand to give his teammate his bike to continue on the climb. However, the saddle height of 1.88-metre-tall Howson was far too high for the 1.64m climber, and Chaves was subsequently forced to change to Tsgabu Grmay's bike, which was slightly better, with the Ethiopean measuring only 1.75m.

The time lost changing bikes meant that Chaves was forced into a high-speed chase of the other main contenders over the top of the Gallina and down the other side. Although with the help of Nick Schultz, Grmay and Howson he was able to make contact again on the next climb – the Alto de la Comella – with just over 20km of the short 94.4km stage to go, the effort of the chase saw Chaves unable to follow the likes of Primoz Roglic (Jumbo-Visma) and Movistar duo Quintana and Alejandro Valverde when Miguel Angel Lopez (Astana) attacked on the climb up to the finish, losing four minutes to the GC favourites.

"We went really, really fast, and for me it was a really hard day. I needed to change the bike twice on the Gallina climb, which was brutal," Chaves said on his team's website.

"After that, I just tried to do my own pace until the line. They started to attack on the Comella and I couldn't follow. I'dspent so much energy before, so I tried to do the smartest thing I could,and hopefully I'm still in the top-10," he said, having in fact dropped to 14th overall, 6:51 down on race leader Quintana.

"It is what it is – it's alive," continued Chaves. "We need to keep trying, keep going like always, and try to enjoy this."

Sports director Julian Dean added: "I couldn't actually be prouder of the team after what happened today. They all did exactly the right thing at the right time, having committed to a plan. They knew Esteban was our leader and they all did everything they could.

"But by the time Esteban got back to the group of favourites, the energy he'd spent was just too much," he explained. "Mikel did a good ride, and it's always good to have the security of him up the road in the group, and it was great ride by him.

"They're both [Nieve and Chaves] still in there, in the race at the moment, and what happened to us today can happen to anyone on any other day of this race, so it's certainly not over yet," said Dean.