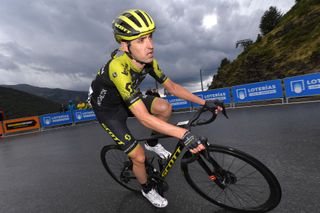 Mitchelton-Scott have announced the contract renewal of Mikel Nieve for the 2020 and 2021 seasons. The Basque rider joined the team in 2018 and has since largely ridden in support of GC leaders Adam and Simon Yates, and Esteban Chaves.

Nieve, 35, made the move from Team Sky last season and has gone on to win the penultimate stage of the 2018 Giro d'Italia at Cervinia, as well as finishing top ten at this year's Vuelta a España.

Before joining the Australian squad, he took stage wins at the 2010 Vuelta plus the 2011 and 2016 editions of the Giro, as well a Critérium du Dauphiné stage in 2014 and three further Grand Tour top tens.

"I enjoy it here," said Nieve in a team press release. "It was a big change and last year I started pretty late racing and I missed a lot of days with the team because of one crash. This year, I have had a full year and now I have more confidence with everyone, and I feel really good here.

"Last year was nice at the Giro with Simon and this year I have also enjoyed it all with the guys. I think over the next two years it will be the same role for me for at the Grand Tours - I have already quite a lot of experience there so I hope I can be important for the team in the important races and support them as best I can.

"We have a really good climbing group now and it's also really exciting to see young riders like Lucas (Hamilton) growing up and to help them is really nice for me."

Mitchelton-Scott directeur sportif Matt White said that Nieve has a spot with the team as long as he wants one, adding that his experience – he has raced 18 Grand Tours – is key for Mitchelton-Scott.

"Mikel has been very reliable these two years he has been with us and we would obviously love to continue that relationship for as long as he wants to keep racing," said White.

"He has a wealth of experience. He has been there before, obviously with Sky as part of their winning Tour de France and Grand Tour winning teams, and because we've got a young group here it's great to have a guy with so much experience. He leads by example, he's a very very solid guy."

Mitchelton-Scott has already made four signings for the 2020 season, with Andrey Zeits joining from Astana, Barnabás Peák and Kaden Groves from SEG Racing Academy, and Alexander Konyshev from Dimension Data from Qhubeka. Matteo Trentin (to CCC Team) is, so far, the only rider confirmed to be leaving the team.