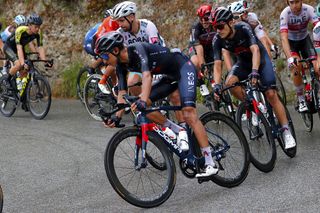 Defending champion Egan Bernal managed to get through the wet opening stage of the Tour de France without crashing and in one piece on Saturday, while around him a number of other favourites – including Groupama-FDJ's Thibaut Pinot – and Bernal's Ineos Grenadiers teammate Pavel Sivakov hit the ground and were left nursing various abrasions and injuries.

In Bahrain McLaren rider Rafa Valls' case, a broken femur as a result of a crash on the Promenade des Anglais in Nice with just three kilometres to go has ended his Tour already, while Lotto Soudal's John Degenkolb is also out, having finished outside the time limit as a result of a crash.

"There were quite a lot of crashes. There were quite a few patches of oil on the road, but at least we didn't race over the last climb – otherwise there might have even more crashes," Bernal said, according to his team, referring to the fact that from the second descent off the Côte de Rimiez until around 25km to go, the race was effectively neutralised, seemingly led by Tony Martin and his Jumbo-Visma squad.

"I think we came out of the stage relatively well, but I'll have to see how my teammates are," continued Bernal.

"It's normal for there to be a lot of crashes in the first days of the Tour. There's a lot of stress, all of the riders are very fresh and there's a real battle to be up at the front. My teammates did a good job of protecting me, of keeping me out of trouble, and that's the main thing on a stage like this," the Colombian said.

Sivakov – set to be one of Bernal's key lieutenants in the mountains this year, despite it being the Russian's first Tour de France – crashed twice, and limped home in a small group more than 13 minutes down on stage winner Alexander Kristoff (UAE Team Emirates).

"I couldn't have expected a worst start for my first Tour de France: two heavy crashes, back-to-back," he posted on social media. "I hit both my hips and knee pretty bad but am still in the mix and in the fight for our road to yellow with the Ineos Grenadiers."

The team told Cyclingnews on Saturday evening that Sivakov hadn't require stitches but does have a lot of abrasions. As things stand, it looks likely that the 23-year-old will start stage 2 in Nice on Sunday.

Couldn’t have expected a worst start for my first @LeTour, 2 heavy crashes back to back! Hit both my hips and knee pretty bad but still in the mix and in the fight for our road to yellow with the @INEOSGrenadiers ! 👊🏻August 29, 2020