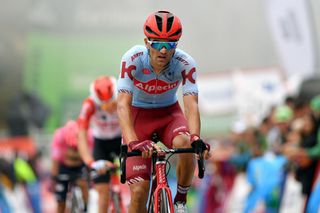 Ruben Guerreiro has joined EF Education First on a two-year deal after Katusha-Alpecin decided to end their time in the sport at the end of 2019.

Katusha-Alpecin’s license at WorldTour level has been taken over by Israel Cycling Academy for 2020, but a number of Katusha’s riders are still without futures. However, after a successful Vuelta a España that yielded two top-five performances and 17th overall, the 25-year-old rider from Portugal was rewarded with a contract at the American squad.

Before his lone year at Katusha-Alpecin, Guerreiro spent two years at Trek-Segafredo and a further two years at the U23 team Hagens Berman Axeon. For Guerreiro the move to EF Education First feels like a  return home.

"I developed as a U23 rider with Axeon.  I learned English with the team. For me this is a homecoming. America is my second country, and I’m really happy to come home to an American team, EF Education First.

“I did my first Vuelta this year, and I was surprised with what I could do. I’m really looking forward to continuing to grow as a Grand Tour rider.”

According to Jonathan Vaughters, his new recruit turned down an initial contract offer during the Vuelta because he felt that the American’s valuation of him as a rider was too low.

"Ruben is bold, but he can back it up. During contract negotiations, he told me he wouldn’t accept my offer, that he was worth more. He told me to watch the Vuelta the next day and that he’d show me. He didn’t win the stage, but he came second. I was impressed."

Guerreiro's race programme for 2020 has yet to be decided, but the rider already has an eye on racing the Tour of California. Such a move would rule him out of the Giro d’Italia but could see him either make his Tour de France debut or return to the Vuelta a Espana later in the year.

"California is a part of the world that I want to go,” he says. “I have been once already for the Amgen Tour of California and something moved me there. I want to go back. I don’t know why. I can’t name it. I just know that I motivated to return and to race well there."