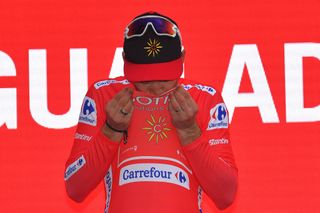 On completing stage 8 of the Vuelta a España in 11th place, Nicolas Edet (Cofidis) took shelter from the rain that washed over the Catalan town of Igualada in a press tent near the finish line. While the reporters vacated the space to hear the immediate thoughts of stage winner Nikias Arndt (Team Sunweb) and the rest of the breakaway, Edet stood peering at a small screen, anxiously scanning the clock in the corner that counted out the break’s advantage on the peloton.

Edet’s features began to crease into a smile when the clock hit five minutes, and overall leader Miguel Angel Lopez (Astana) and the peloton were still navigating the road furniture on the outskirts of town. By the time the magic figure of 6:24 was reached, the Frenchman was already being chaperoned towards the podium. The red jersey of race leader was his.

“C’est énorme,” Edet smiled when he took a seat in the press tent on the other side of the Avinguda del Mestre Montaner, the maillot rojo now stretched snugly across his shoulders. He was told that 41 years ago, Bernard Hinault led the Vuelta for the first time – the jersey was yellow in those days – when the race set out from Igualada for Jaca.

“C’est énorme,” Edet said again, though he suspected that Hinault might well have left a calling card in just about every town in the Iberian Peninsula over the course of his career. “He’s got a lot of records, but that’s cool, it makes this even nicer.”

Edet, for his part, expressed pride at leaving his own mark on the Vuelta, the second after he carried the king of the mountains jersey to Madrid in 2013. As the early break’s advantage stretched out beyond 7 minutes on the ascent of Puerto de Montserrat, he began to realise that the opportunity of a lifetime was crystallising before him.

“I was best climber of the Vuelta in 2013. It wasn’t a win, but it was enormous to be on the podium in Madrid,” Edet said. “Now having the red jersey of the Vuelta, it’s something super, and something that might only happen once in my career. I had to take the opportunity when it presented itself. I’m very happy. I’ve had good legs since the start of the Vuelta, I tried to stay in contact with the favourites in the mountain stages this week, and then tried to get in breaks.”

Edet was part of a 21-man move that forged clear 30km after the start in Valls, and their numerical strength helped them to build up a hefty advantage over an Astana team that seemed – despite Lopez’s protests to the contrary – content to cede the maillot rojo for the third time in the space of a week.

In Andorra on Sunday, Edet will set out with a lead of 2:21 over Dylan Teuns (Bahrain-Merida) and 3:01 over Lopez. With five mountain passes crammed into 94.4km, the Frenchman will be hard pushed to hold the red jersey as far as Monday’s rest day and the race’s entry into France.

“I want to take advantage of the moment and the jersey. It’s the queen stage of the Vuelta, it will be énorme to do it with this jersey on my back,” Edet said. “We’ll see how it goes tomorrow evening, but I’ll certainly give it everything.”

Edet endured disappointment in July, when his Tour de France was ended prematurely by an intestinal virus on the road to La Planche des Belles Filles in the opening week. “I just had to accept it as destiny, and I saw it as a nice opportunity to make amends at the Vuelta,” said the 31-year-old.

“Every time I go away to the race, my son asks me why I don’t bring him back a lion, the Credit Lyonnais lion from the Tour. This time it’s a Spanish bull, but I hope he’ll be happy with this.”