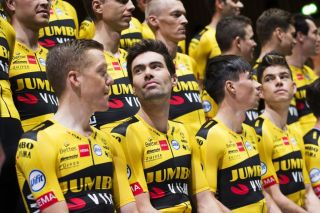 Tom Dumoulin hopes to return to racing at the Volta a Catalunya later this month. The Dutchman, who hasn't raced since the Critérium du Dauphiné last summer, endured a health setback this spring ahead of his slated Jumbo-Visma debut at the Volta a la Comunitat Valenciana.

After a 2019 campaign ruined by a knee injury suffered in a crash at the Giro d'Italia, Dumoulin's recovery from what turned out to be intestinal parasites last month meant that a return to the bike has been put on hold.

Dumoulin spoke about the illness and his slated comeback with Dutch newspaper De Telegraaf from Tenerife, where he's been at a training camp since the beginning of the month.

"I hope to return to the Volta a Catalunya but at the moment nothing is certain. I'm taking it into account that it will be a very crazy spring," he told De Telegraaf.

Tom Dumoulin on the mend after being treated for intestinal parasites

Tom Dumoulin ready to return to racing after recovering from sickness

The race is currently under threat from Covid-19 coronavirus, which the World Health Organisation classified as a pandemic on Wednesday. The spread of the virus in Italy has seen Strade Bianche, Tirreno-Adriatico and Milan-San Remo among the races cancelled.

Meanwhile, Paris-Nice has limited spectators after a French government decree, and Catalunya is set to take the same measures, according to the President of the Spanish Cycling Federation.

Dumoulin's trip to Tenerife hadn't insulated him from the outbreak either – the day before heading out to the island, 700 guests in a hotel there were quarantined after four were found to have the virus. For Dumoulin, though, it has been a period of isolation from the stresses of the pandemic.

"I wasn't worried, I'm still not. It's not like the whole island is infected with coronavirus, and there was no negative travel advice.

"I'm actually quite comfortable here now, because I don't meet many people. I cycle five to six hours a day and then go back to my own hotel. I keep to the quarantine rules quite well," he joked.

Dumoulin also talked about his own health issue, which saw him miss Valencia and also put him out of Tirreno and San Remo before they were cancelled by organisers RCS Sport.

"In [December] I felt really super. I rode like a train, had a lot of confidence and was looking forward to the new season," he said. "In the end, I deteriorated so quickly that it couldn't just be a little fatigue.

"I didn't feel terrible, but I just wasn't able to function as a top athlete. I missed around 20 per cent of my energy. On the plane to Valencia I had to go to the toilet every 10 minutes, so I immediately returned home.

"After that, we checked my stool and found out I was suffering from a parasite."

Dumoulin took a few weeks to recover from the parasite, he said, and even afterwards didn't feel well as the antibiotics had affected the good bacteria as well as bad. The Dutchman added that it's only this month that he's felt back on track.

"Actually, it's only in the last two weeks that things are really going in the right direction. I don't know if there's a connection with my intestinal complaints. Maybe I had the parasite for years, we'll never know. The important thing is that now I am happy again.

"It was a mental blow to sit out and the malaise was amplified because I felt miserable and tired. But last year I found out how much I liked cycling and winning races. I keep that in mind all the time and it helps me enormously to keep looking forward in a positive way."

The future, then, begins at Catalunya, assuming the race goes ahead – 12 days is a long time in sports with the coronavirus spreading further each day. But Dumoulin's main goals – the Tour de France and Tokyo Olympics – remain, with the Dutchman hoping that summer will see the virus die off.

"I think about the Tour sometimes, like the Olympics," he said. "Those are still my goals for a beautiful summer, even if it's still far away. Hopefully the virus will slowly dissolve as it warms up. For most riders this precarious situation is very frightening.

"My advantage is that for almost a year now I've been used to the fact that there hasn't been a really clear plan for my return, so maybe I'll come out of this period the best of all riders."

I’m training at Teide at the moment. Starting to feel better again, and crossing my fingers for the races to continue later this spring with all the corona stress going on in Europe 🧐 pic.twitter.com/UhUinpvhZLMarch 8, 2020