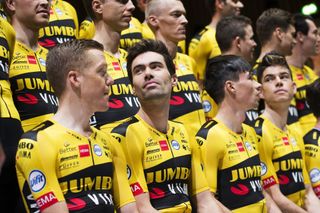 Tom Dumoulin (Jumbo-Visma) says that he has recovered from the illness – discovered to be intestinal parasites – that has so far prevented him from starting his 2020 season, and is currently training at altitude on Mount Teide in Tenerife, Spain, with a view to returning to racing soon.

Dumoulin hasn't raced since pulling out of last June's Critérium du Dauphiné due to a knee injury sustained in a crash at the previous month's Giro d'Italia.

"I'm training at [Mount] Teide at the moment," the 2017 Giro champion wrote on Twitter on Sunday. "Starting to feel better again, and crossing my fingers for the races to continue later this spring with all the corona stress going on in Europe."

Tom Dumoulin on the mend after being treated for intestinal parasites

After his illness prevented him from starting the Volta a la Comunitat Valenciana early last month, Dumoulin then reported that he wasn't going to be in sufficient shape to race at Tirreno-Adriatico and Milan-San Remo, which he'd hoped would have been his first two races of the 2020 season.

Both races – with Tirreno having been due to start on March 11 and San Remo on March 21 – have subsequently been postponed because of the coronavirus crisis in Italy, and the continuing situation across the world means that all upcoming races remain in danger of cancellation or postponement, although this week's Paris-Nice, in France, is continuing, and set to finish on Sunday.

Dumoulin now looks likely to make his racing return at the Volta a Catalunya (March 23-29), where he'd be up against Deceuninck-QuickStep's Remco Evenepoel – who was also due to race at Tirreno before it was cancelled – and Team Ineos, who plan to make their racing return at the Spanish stage race, after a period of mourning the recent death of the team's sports director, Nicolas Portal, as well as avoiding travel during the current climate due to the coronavirus.

I’m training at Teide at the moment. Starting to feel better again, and crossing my fingers for the races to continue later this spring with all the corona stress going on in Europe 🧐 pic.twitter.com/UhUinpvhZLMarch 8, 2020