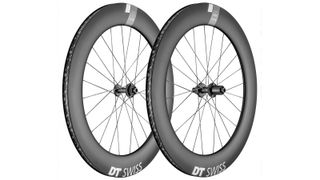 Road technology has seen a dramatic progression in recent years with disc brakes now commonplace, and tubeless road tyre technology and wider rims becoming accepted as the future. The original ARC was released in 2018 and DT Swiss admits that while the old ARCs were designed to be as aero as possible, the design was restricted by the requirements of rim brakes on the rim.

DT Swiss has made a number of changes to the rim profile, which not only claim to increase aero performance, but also improve handling stability and reduce rolling resistance.

Continuing its work with aerodynamic specialists Swiss Side and utilising Computational Fluid Dynamics (CFD) simulation, wind tunnel and real-world testing, DT Swiss has reengineered its AERO+ concept. The rim profile has been narrowed on the inside edge and widened on the outside when compared to the previous models. This is claimed to not only perform better aerodynamically, but also to be more predictable and controlled in challenging crosswinds.

The rim width has been broadened to 20mm for a better tyre profile and to create a smoother transition from the tyre to the rim to limit turbulence. DT Swiss recommends running a 25mm front and 28mm rear tyre for optimum performance from the wheelset. Both the 1100 and 1400 models have hooked beads, but can be set up as tubeless to gain increased grip, comfort and puncture-resistant performance with lower rolling resistance. If you hadn't guessed, these wheels are only available in disc-brake versions.

DT Swiss claims to have found a 1.1-watt saving by redesigning the spokes. The new 35 per cent wider and 23 per cent thinner DT Aerolite II spokes are used on the front and non-driveside rear, while the laterally stiff DT Aero Comp II spokes also get a more aerodynamic profile for the rear driveside. These new spokes are only used for the ARC 1100 DICUT wheelsets; the 1400 versions use the older DT Comp spokes.

The hubs on both the 1100 and 1400 versions see an updated thinner hub profile for better aerodynamics and a reworked Ratchet EXP freehub system, which should offer easier servicing and increased reliability. The 180 hub in the 1100-level wheelset is decked out with low-friction SINC Ceramic bearings and a lightweight 36 SL Ratchet EXP. The 1400 wheelsets also get the 36 SL Ratchet EXP, but in a 240 hub body that spins on stainless-steel bearings.