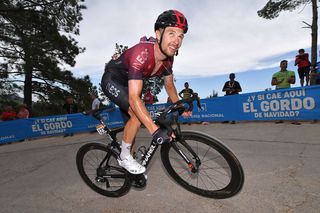 Owain Doull has signed a two-year contract extension with Team Ineos, which will keep the Welshman at the British WorldTour outfit until at least the end of 2021, the team has announced.

The 26-year-old is currently riding his first Grand Tour at the Vuelta a España, having enjoyed a successful 2019 season that has seen him win a stage at the Herald Sun Tour in February and take second place at Kuurne-Brussel-Kuurne behind Deceuninck-QuickStep's Bob Jungels the following month.

Doull joined the team – as Team Sky – in 2017 from UCI Continental squad Team Wiggins, and said that he feels as though he's continuing to develop as a rider with Team Ineos.

"My first year with the team was up and down, the second was better, and then this year has surpassed my expectations, to be honest,"Doull said in a press release. "Starting my first Grand Tour is something I've wanted to do since I joined the team.

"'Progression' is probably the key word for me," he said. "I want to carry on learning from the best people in the best team in the world."

Doull added that he hoped that progression continues on into next season, when he hopes that he'll be able to perform a similar role for the team, but at a new, improved level.

"2020 will be similar to this last year with a big focus on the Classics before switching to that support role in the big stage races. It's a role that [Ineos teammate] Luke Rowe has performed so well for years, and he's someone I massively look up to.

"I'd like to kick on from what I did in the Opening Weekend at the Classics this year and try to transfer that into the Tour of Flanders and Paris-Roubaix, and then hopefully get another Grand Tour under my belt," he continued.

"Here at the Vuelta, I've spoken to a lot of the riders and staff, and everyone says that after your first Grand Tour you can physically move on quite a lot. I understand the Vuelta is a good Grand Tour to do first, too, because it sets you up well for your off-season, so hopefully I'm starting from a higher level next season and that progression will carry on into the Classics," said Doull.

Team Ineos coach Conor Taylor added that Doull's consistency this season has been key to his development.

"Owain has been a highly consistent performer this year, starting with his first professional win in Australia and carrying that form through the Classics, including his podium finish at Kuurne," said Taylor.

"He has been a key support rider across several stage races, which has resulted in him being selected for his first Grand Tour," he added. "Owain is a highly versatile rider, a true teammate on the road, and in time we hope to see him develop into an important road captain for us.

"Looking forward, Owain has a number of personal targets for next season, particularly around the cobbled Classics. We feel that he's in the best environment to help him maximise his potential and achieve his ambitions in the sport," Taylor said.