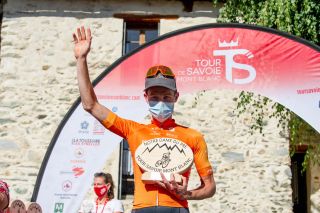 On Saturday, Mannion won the stage 4 mountaintop finish on Notre-Dame-du-Pré against a select group of climbers for his first European stage race victory. He repeated the feat on stage 5 on Sunday, dominating the 22.4km mountain time trial from Aix-les-Bains to Mont Revard.

“This stage was always the one I knew I could win but to go back to back after yesterday was really something special,” said Mannion, who won the time trial by more than a minute over GC winner Rolland.

“I knew I was on a good day from the first minutes of my warm-up. I had the confidence that if I stayed within my limits in the first half I’d be tough to beat,” added Mannion in a statement from the UCI Pro Continental team.

The UCI 2.2 race featured five stages over four days, including a double dose of mountains on Friday. Mannion took second on the 97.4km stage 2 Friday morning to make an appearance for the GC battle.

Although it was shorter at just 37.4km, stage 3 challenged riders' tired legs with an afternoon showdown from Saint-Michel-de-Maurienne to Valmeinier, which was dominated by Rolland. Mannion dropped out of contention for the yellow jersey.

“It was a really tough stage,” said Mannion. “I felt great and then I just totally bonked. I was seeing stars out there and just trying to turn the pedals over. That ruined my GC chances but I stayed positive and wanted to come back and win today’s stage.”

France’s Tour de Savoie Mont Blanc marked the restart of the road racing season for Rally Cycling since March 1 and the outset of the COVID-19 pandemic. Traveling from the U.S. to France for the race with Mannion were teammates Nate Brown and Nickolas Zukowsky, as well as Team Director Pat McCarty, linking up with trainees Maël Guégan and his fellow Frenchman Jason Tesson.

“This is a great way for us to restart our season,” said McCarty. “We’re picking up right where we left off before the pandemic and I have high hopes for the rest of the year.”