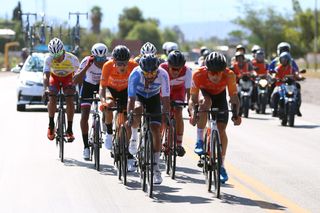 The breakaway during stage 2 of the Vuelta a San Juan (Image credit: Getty Images)

After stage 1 of the Vuelta a San Juan was spoiled by a mass pile-up caused by a spectator, the second stage saw several riders in the breakaway crash after a dog ran out into the road.

The incident came with 148km left to race on the flat stage starting and finishing in Pocito, which was won by Fernando Gaviria (UAE Team Emirates). As the breakaway rolled along, 1:14 up on the peloton, a black dog ran out into their path.

Three of the riders in the break – Leandro Velardez (Agrupacion Virgen de Fatima-Saddledrunk), Christofer Jurado (Panama) and Iker Ballarin (Fundación-Orbea) – managed to avoid colliding with the dog. Robinson Ruiz (Peru) wasn't so lucky, riding into the dog and then sliding out trying to avoid a collision with Ballarin.

How to watch the Vuelta a San Juan – live stream, TV and results

Right behind the Peruvian, Velardez's teammate, sprinter leader Daniel Juarez, was unable to avoid flying over his handlebars and hitting the deck. Further back, the remainder of the break, including Robin Carpenter (Rally Cycling) were forced to stop.

Meanwhile, the dog, which is reportedly unharmed, could be seen running away from the scene of the accident shortly afterwards.

All riders rejoined the race without any problem, though Ruiz dropped back to the main peloton after getting back on his bike. Gaviria went on to take his first victory of the season, launching his sprint from a poor position to beat Nicolás Javier Naranjo (Agrupacion Virgen de Fatima-Saddledrunk) and Marco Benfatto (Bardiani-CSF-Faizanè) to the line.

The Colombian leads the race ahead of stage 1 winner Rudy Barbier (Israel Start-Up Nation) on account of his better stage placings. The Vuelta a San Juan continues on Tuesday with stage 3, a 15.2km time trial from Ullum to Punta Negra.