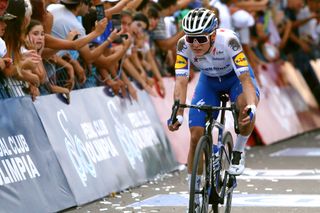 Remco Evenepoel crosses the line on the opening day of the 2020 Vuelta a San Juan (Image credit: Getty Images Sport)

Remco Evenepoel (Deceuninck-QuickStep) remains in the hunt for overall victory at the Vuelta a San Juan after the race jury decided to revise the results of stage 1 and award the Belgian and his fellow crash victims the same time as the front group.

Evenepoel, Oscar Sevilla (Team Medellin), and Eduardo Sepulveda (Movistar) were among the riders to lose time following a mass crash with 3.4km of Sunday’s opening leg to San Juan remaining.

Although Evenepoel remounted and gave determined chase, he crossed the finish line some 1:16 down on stage winner Rudy Barbier (Israel Start-Up Nation).

As the incident took place outside the 3km to go banner, it initially appeared that Evenepoel’s general classification bid had suffered a crippling blow. When the commissaires eventually issued the official results almost two hours after the finish, Evenepoel was duly listed as 76th overall, 1:26 down on overall leader Barbier when time bonuses were taken into account.

Barbier sprints to stage 1 victory at Vuelta a San Juan

Shortly after midnight on Sunday, however, the race jury, chaired by Miguel Echezortu of Spain, issued a short statement amending their previous verdict. Having reviewed video footage of the incident, they judged that the crash had been caused by a spectator leaning into the road, and thus they ruled that the riders held up by the incident should be awarded the same time as the front group.

"After the crash on the first stage of the Vuelta a San Juan that happened 3.5km from the finish line, and after watching a video that shows clearly that the crash was provoked by a spectator when she touched the handlebar of a rider, the college of commissaires has taken the decision to give the same time to all the riders that were in the bunch in the moment of the crash," read the statement.

The statement was not accompanied by an amended results sheet, meaning that there is still some uncertainty on Sunday night over the precise outline of the general classification picture ahead of stage 2. It is clear, however, that Evenepoel will start the stage just 10 seconds off the overall lead of Barbier. The 20-year-old placed 9th overall in his professional debut in San Juan a year ago and began this year’s race as a favourite for final victory.

Evenepoel crossed the finish line on Sunday with a scuffed jersey and abrasions on his left forearm, though he reported no lasting injury after the stage. His teammate Julian Alaphilippe avoided the crash in the finale but conceded 14 seconds on the final run-in after he had helped to tee up Alvaro Hodeg for the reduced bunch sprint.