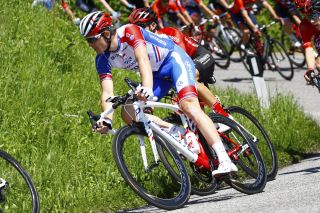 Groupama-FDJ sprinter Arnaud Démare has broken his wrist after crashing during a mountain-bike training accident, although the Frenchman is reportedly only set to be off the bike for up to two weeks.

According to L'Equipe, Démare fell while out riding near to his home in the Picardy region of northern France last week, breaking the scaphoid bone in his left wrist, and has been told that he won't be able to ride outside again for between one and two weeks.

Démare cuts back on Classics commitments to focus on bunch sprints

Although his morale is apparently good, it's nevertheless a further blow to Démare's season. He had been one of a number of riders who took part in the UAE Tour that were forced to remain in lockdown at their hotels in Abu Dhabi after the race for 11 days because of the developing coronavirus crisis, before being given the all-clear to return home.

Démare was subsequently among the group of France-based professional riders who were forced to do all their training indoors until May 11, after which some of the country's COVID-19 restrictions were lifted, allowing them to train outdoors once more.

"It's better that it happened now rather than in two months' time," Groupama-FDJ manager Marc Madiot told Le Parisien at the weekend. "But he's had bad luck since the beginning of the season."

It's hoped that the accident won't affect Démare's first goal after the resumption of competition, which is said to be the rescheduled Milan-San Remo on August 8 – a race that the 28-year-old won in 2016.

"I've spoken to him on the phone, and he's doing fine. It was just a silly crash. He lost control, and he fell, but he'll be OK," Madiot said.