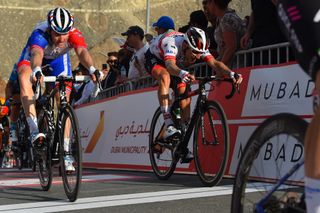 Groupama-FDJ's Arnaud Démare took third place on stage 2 of the UAE Tour at Hatta Dam on Monday, beaten by new race leader Caleb Ewan (Lotto Soudal) and Deceuninck-QuickStep's Sam Bennett, but buoyed by his placing on what was only his second day of racing in a season during which the 28-year-old Frenchman aims to focus more on bunch sprints than attempting to win the Classics.

The winner of the 2016 Milan-San Remo – where he also finished third in 2018 – will still ride a number of one-day races in 2020, but says that his focus will shift more towards stage races with days that are likely to end in bunch sprints, to give himself the best chance of winning.

That change of focus comes on the back of what was for him a disappointing 2019 season, which nevertheless saw him take five victories, including a stage at the Giro d'Italia, where he beat Elia Viviani, Rüdiger Selig and Ewan to win stage 10 in Modena.

In comments published on the Groupama-FDJ website last week, however, Démare said that he would miss the Omloop Het Nieuwsblad and Kuurne-Brussel-Kuurne this upcoming 'Opening Weekend', where he has a career-best finish of second at the 2018 edition of Kuurne. Instead, after the UAE Tour, where he still has another three opportunities to try to win, he'll line up at Paris-Nice in early March, hoping to add to his tally of three stage wins at the French stage race, achieved in 2016, 2017 and 2018.

"This season's objective is to re-target my goals, to increase my chances of winning. On the UAE Tour, there's certainly a lot of competition, but also some nice sprints to go for. There are four stages for sprinters and another one for puncheurs, so that means great opportunities to chase wins," he said, speaking ahead of this week's race.

"I want to set myself up for more potential victories, and therefore I'm skipping the Opening Weekend in Belgium with Nieuwsblad and Kuurne. These are races that I really like but that, these days, don't give me the chances of success that I would hope for," he said.

"I have absolutely no bitterness about races that are not on my calendar," continued Démare. "It's actually very simple: when I win, I do it in sprints. So I have to compete in more sprints.

"For example, when we got to the Giro last year, I had only competed in five or six sprints up to that point, which is really not much. The idea this year is that I could be a potential winner at all the races I'm going to start.

"I really like the E3 BinckBank Classic, the Tour of Flanders, the Omloop Het Nieuwsblad and Kuurne-Brussel-Kuurne, but it's time to refocus my priorities. And my main priority is to win," he said, hinting that he may not ride Flanders.

"I must target the Classics that are likely to finish in a sprint, namely Gent-Wevelgem, Milan-San Remo, or even Paris-Roubaix, where there is always a possibility to get to the velodrome in a small group," said Démare, who finished sixth at Roubaix in 2017.

'The legs were still good in the sprint and I'm satisfied'

On Monday's uphill finish at Hatta Dam at the UAE Tour, Démare was well beaten by Ewan and Bennett, but revealed that he'd experienced a mechanical mishap just before the climb.

"With 1,200 metres to go, I hit a speed bump and my chain jumped. I had to stop pedalling for 10-15 seconds, which seems like quite a long time in those moments," explained Démare of Monday's finish. "Then Bruno [Armirail] got to me and gave me a small push, and I got my chain back on, but I'd lost around 20-25 places.

"I'd just got back into the first 15 at the bottom of the final hill," he explained, "as I knew you had to be in the first five or three to be able to win, but the legs were still good in the sprint and I'm satisfied."

Démare has another opportunity on Wednesday's stage 4 from Zabeel Park to Dubai City Walk.